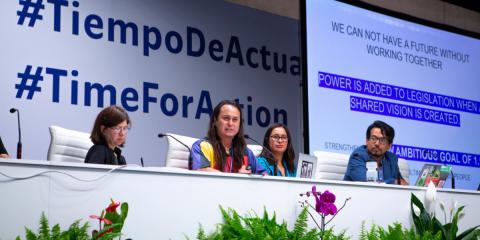 Pope Francis: "Re-animate the Economy:" Pope Francis has invited “young economists and entrepreneurs” from around the world to Assisi, Italy March 26-28 for the “Economy of Francesco,” a gathering to envision an inclusive, sustainable economy that brings “life not death.” The following is an excerpt from his letter of invitation to the gathering.

Global Fragility Act: Action for Peace: The Global Fragility Act, signed into law in December 2019, was supported by many faith-based advocacy groups as a measure to more effectively prevent violence through peaceful means for vulnerable communities around the world.

Trade: NAFTA Reform Falls Short: The new U.S. Mexico Canada Agreement (USMCA) offers a few improvements but falls short of expectations for many groups, including some unions and environmental activists.

Burma: Crossing the Point of No Return: Nobel Peace Prize Laureate Aung San Suu Kyi defended the government of Burma (Myanmar) against charges of genocide at the International Court of Justice in the Hague in December, despite graphic evidence to the contrary. Kenneth Wong, a Burmese-American writer and lecturer at the University of Berkeley wrote about it on his blog https://kennethwongsf.blogspot.com/, which is reprinted here with permission.

Geo-engineering: Solar Radiation Management: This article describes the numerous ways the geoengineering technology of solar radiation management is a false solution to the climate crisis.

North Korea: Human Cost of Sanctions: Korea Peace Now!, a global movement of women mobilizing to end the Korean War, commissioned an international and multidisciplinary panel of independent experts to assess the human cost of sanctions on North Korea, and particularly on North Korean women. The following is the executive summary of the 48-page report.

Outcry Against Deaths of Migrant Children: The Maryknoll Office for Global Concerns joined other faith-based and immigrant advocacy organizations in gathered in prayer and protest on the anniversary of the death of Jakelin Caal Maquin, a child migrant who died after being taken into U.S. Customs and Border Protection custody.

Statement on Israeli Settlements: Churches for Middle East Peace (CMEP), a coalition of faith-based organizations working for peace in Israel/Palestine of which the Maryknoll Office for Global Concerns is a member, released the following statement on November 20 on recent decisions regarding Israeli settlements in the West Bank.

Resources: Find resources for Lent, for Ecumenical Advocacy Days 2020, on peace in South Sudan, and much more.

Photo Credit: Liam Finn from CAFOD. Chloe Noel of MOGC is the panelist on the left at a side event at COP25 in Madrid.