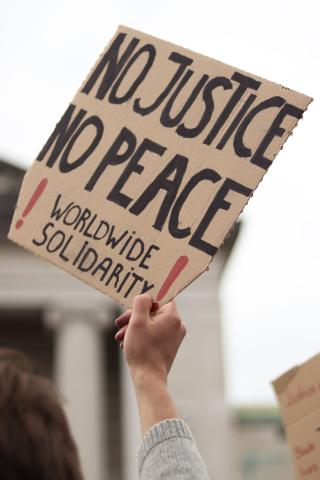 At this year’s annual conference of Christian peace and justice advocates, three speakers highlighted ongoing human rights concerns in the Philippines, Colombia, and Israel-Palestine. The following article was published in the May-June 2022 edition of NewsNotes.

The focus of the international program of this year’s Ecumenical Advocacy Days (EAD) conference was protecting human rights, a key concern given the global rise of authoritarianism and serious human rights violations in many countries. EAD is an annual gathering of Christians to advocate for justice and peace on domestic and international concerns, typically held in Washington, DC, but held virtually again this year due to lingering COVID-19 concerns.

At the main event for the international program the speakers were Bishop Reuel Marigza, General Secretary at the National Council of Churches in the Philippines; Zeina Ashrawi Hutchinson, advocacy officer with Defense for Children International, Palestine; and Martin Nates, Executive Director at Justapaz, a Mennonite peacebuilding organization in Columbia.

Bishop Marigza began by describing the situation facing human rights defenders in the Philippines, which he called “alarming.” He explained how the military doctrine of an “all-out war” against dissidents has made defenders of human rights victims of human rights violations, including members of his own church community.

The Bishop described the Duterte government’s method of targeting dissidents by  adding their names to  “orders of battles”, or lists of so-called enemies of the state. Without substantial proof of any unlawful conduct, the dissidents are labeled as communists or terrorists and then harassed or hunted down by the military. Even well-known advocates such as leaders of labor unions and journalists have become victims of this targeting, known as “red-tagging,” and have experienced extrajudicial detention, heightened surveillance, and even assassination by the military.

Zeina Hutchinson Ashwari, a Palestinian-American born in Jerusalem, said that it was hard to know where to begin to describe the human rights situation in Israel-Palestine, given how rampant and longstanding are the violations against Palestinians. She enumerated the extrajudicial killings of Palestinians just this year – 47, including 8 children – and noted that more than 500 Palestinian children are held each year in Israeli military detention, where they are subject to cruel and unsafe conditions. She emphasized that the international media fails to highlight the fact that military occupation is a war crime under international law.

Martin Nates, director of Justapaz, a Mennonite peacebuilding program in Columbia, emphasized the ongoing violence against civilians, despite the landmark peace agreement signed five years ago which sought to end the country’s civil war. He noted the failures of the government to implement the peace accords, and explained that youth movements protesting the ongoing violence have been met with armed resistance by the military.

When asked what actions the U.S. government and U.S. citizens can take to support human rights in their countries of origin, the panelists agreed that international solidarity is key. Bishop Marigza called for a global solidarity coalition to push for human rights protections in the Philippines. He named several concrete actions taken by the U.S. government to help the situation, including enforcement of the Global Magnitsky Act, which allows the U.S. to impose sanctions and penalties on human rights violators. He also urged the United States to support the presence of international observers for the upcoming presidential election in the Philippines, which will be held May 9.

Mr. Nates asked the United States to review the implementation of its USAID funding to Columbia, urging the Biden administration to ensure that U.S. development aid to Columbia truly seeks to foster peace and a democratic environment.

The panelists were united in their call for international solidarity with local human rights defenders and local human rights movements. They agreed that even when the advocacy of individual citizens in the U.S. or elsewhere seems futile, acts of solidarity are noticed by the people undergoing oppression, making them feel less alone and inspired to continue their activism. “Long live international solidarity!” wrote Bishop Marigza in the chat with conference participants.

Following the plenary, conference participants engaged in advocacy through lobby visits with their Congressional representatives. This year’s international ask to members of Congress was to support a bill that would help prevent U.S. arms sales to human rights abusers and violators of international law, called the Safeguarding Human Rights Arms Exports Act of 2021.

Faith in action: Ask your Members of Congress to support this bill: https://bit.ly/3KqpGA0