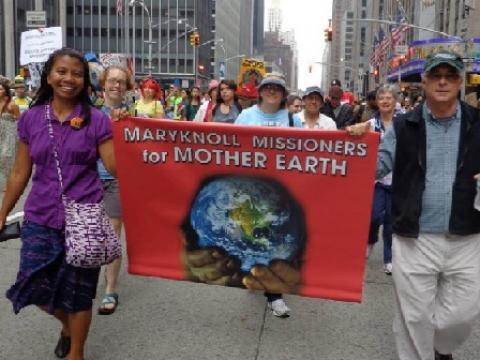 Climate activists celebrate the passage of the most significant climate bill in the history of the United States while calling for bolder steps to further reduce greenhouse gas emissions and correct environmental injustices suffered by frontline communities. The following article was published in the September-October 2022 issue of NewsNotes.

The cry of the earth has finally been heard in the halls of Congress with the passage of the Inflation Reduction Act (IRA) – the biggest climate bill in the history of the United States. Without the countless sacrifices of frontline communities and the tireless efforts of environmental activists over decades, this law would not have come into being.

Although the name of the bill hardly reflects its principal focus, the money behind it does. Of the IRA’s total spending package of $437 billion, almost $370 billion will go to making the transition to clean energy in the United States a reality.

No doubt, the most effective advocate for the IRA was the planet itself. While the Senate debated, stalled, sidelined, shelved, and reconsidered the bill, record heat, rain, drought and wildfires raged.

The winning formula proved to be that of taking a positive approach, providing incentives and funding for the positive steps necessary for healing our Common Home versus a focus on legislating against what will harm it.

Billions of dollars will be directed toward investments and incentives for renewable energy projects and technologies, along with climate-smart practices in food systems, forest and coastal management. In addition, the bill will create millions of clean energy jobs over the next decade with provisions for good wages and benefits.

Many aspects of the IRA empower U.S. citizens themselves to take a role in healing the planet through clean energy consumer choices supported by tax incentives. Household electrification and clean energy upgrades will become significantly more affordable for consumers. The bill includes major investments in electric vehicles and offers a $4,000 consumer tax credit for lower/middle-income individuals to buy used EVs and $7,500 tax credit to buy new EVs.

All told, the estimate is that these measures will reduce US greenhouses gases by 40% (from 2005 levels) by 2030. Given that the US has historically contributed to 25% global carbon emissions this packs a punch on the world stage.  It also dramatically reverses the trend of recent years in which the United States led the race to the bottom in global commitments to reduce toxic emissions and stop the climate crisis.

Another $60 billion dollars are directed to communities that have been disproportionally affected by our fossil fuel driven economy, support programs that will clean up pollution and create healthy, toxic-free communities. This is not nearly enough, but a good beginning.

The IRA is far from perfect. It includes tax credits for the questionable technology of carbon capture and sequestration, extending the life of dirty coal plants and exposing residents to toxic coal pollution. It mandates the federal government to offer up parts of the Gulf of Mexico and Alaska’s Cook Inlet for oil and gas development. Of great concern is the side deal that was made to move a separate bill for the “permitting reform bill” will affect the Black, Indigenous, low-income, and communities of color that will continue to be disproportionately affected. Stay tuned on how to take a stand on this bill.

One of the greatest victories of the IRA is the proof that people-powered movements can and do work. This bill would not have been possible were it not for the passion, dedication and hard work of so many climate champions - including many reading this article - who have written, talked, walked, prayed and pushed for actions that will heal our Common Home.

All of us should therefore take a moment to savor and celebrate this victory. And then, we need to take a deep breath and write, talk, walk, pray and push some more. While a laudable sum, $369 billion – it is a ten-year bill that translates to $37 billion per year, a mere 4% of next year’s defense budget of $840 billion. What battle could be more important for ourselves, for our children for our grandchildren, for our one and only most exquisite planet?

Faith in action: Send a thank you or follow up letter to your senators about their votes on the Inflation Reduction Act. https://bit.ly/CatholicClimateCovenantAction