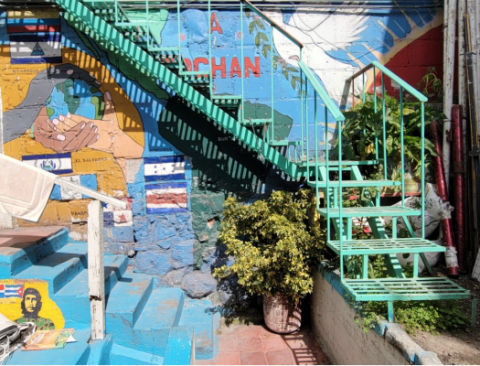 Cher migrant pour le moment, nous n’avons pas assez d’espacé à Tochan” the sign reads in French on the door of the Casa Tochan, one of the few migrant shelters in Mexico City, informing migrants that for the moment, they don’t have space. The overwhelmed shelter staff would like not to put up that sign, but for the moment they have had no other choice because of the large groups of Haitians that they have been receiving in the last two months at the small shelter in…Mexico City.

Casa Tochan like the other two migrant shelters that exist in Mexico City, has been well over capacity in recent weeks. Tochan is a shelter just for male migrants with only 30 beds. When I was there in mid-October the shelter had 40 migrants staying, over half Haitian, and the rest a mix of Central American and other migrants. At one point at the end of September they fit 76 migrants –on their floors, kitchen, closets, anywhere they could fit a mattress. Hermana Magda, the director of CAFEMIN (Casa de Acogida Formación y Empoderamiento de la Mujer Migrante y Refugiada), another shelter in Mexico City, told me that they were housing around 200 people, even though they have capacity to fit 50 people comfortably. CAFEMIN had such a large Haitian population that they had set up two kitchens so that each group of migrants could cook food to their liking and feel more at home in Mexico. These are two of the (at most) three shelters in Mexico City that are doing extraordinary work with very limited resources to welcome Haitian, Central American, and other migrants amidst multiple challenges.

Gabriela Hernandez (Gaby), the director of Casa Tochan and a volunteer, told me how most Haitians at the shelter have made the long and dangerous journey to Mexico City from Brazil and Chile. The migrants have all told shelter staff of the lack of opportunities they had to integrate and live with dignity in South America. The vast majority do not speak of the United States as their destination. All have pending applications with Mexico’s refugee agency (COMAR) in Mexico City and are willing to wait it out to hear if they will be granted asylum or not.

The same is true of the Haitian families in CAFEMIN. Some Haitians in Tochan and CAFEMIN try to find work in Mexico City any way they can, even before receiving their identification document in their asylum proceedings, making them vulnerable to exploitation in the informal sector. As is the situation across most of Mexico, Haitians face racism and targeting by Mexican police…

…It is too early to tell if any of the Haitians, or other migrants who had already been waiting a few weeks at Tochan and CAFEMIN in Mexico City will ultimately be granted asylum. The Mexico City COMAR office has not received many of the country’s asylum applications… Haitians still have one of the lowest recognition rates compared to other nationalities. Many Haitians seek asylum in Mexico because it is one of the only options available to them to regularize their status in Mexico.

The reality is that not all the migrants crossing into Mexico–whether Haitian or Central American—have the United States in mind as their final destination. Many do, especially people with family networks in the United States, but not all. But waiting in Mexico means prolonged wait times for asylum applications to be resolved without much support and access to basic services. This difficult situation is further exacerbated by systemic racism for black migrants, extortion from organized crime, and the possibility of detention and deportation from Mexican migration, security forces, and law enforcement. The Mexican government’s apprehensions of migrants are at an all time high since 2019 and deportations to Haiti from Mexico have also continued since early October.

It is no surprise that many give up given these enormous obstacles. And this is after an already traumatic and violent journey that migrants take, often crossing through multiple countries.

As we look beyond the horrific images at Del Rio, Texas of our Haitian brothers and sisters being abused by U.S. border officials and search for solutions, we must call on the U.S. government to rescind the Title 42 border policy that closes the border to asylum seekers and continues to fuel expulsions to Haiti, Guatemala, and southern Mexico. There never was a public health justification for a policy…The Biden administration must stop this unnecessary suffering, live up to its promises and take immediate steps to restore asylum at the border and build a system that welcomes people with dignity.

And we must call on the governments in the region, including the Mexican government, to provide migrants and refugees with humanitarian solutions, including access to asylum protection and other alternatives so that people can integrate and live with dignity if they choose to do so in Mexico.