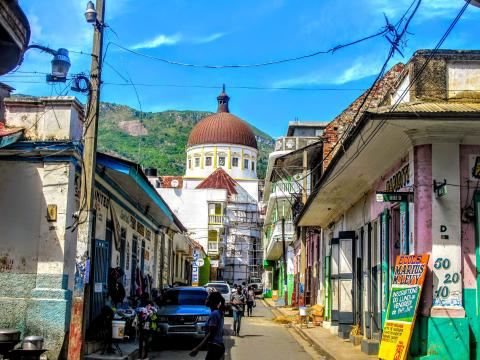 Haitian diaspora leaders launch advocacy campaign to end U.S. support for the current Haitian government and allow Haitians to lead their own democratic process. The following article was published in the May-June 2022 edition of NewsNotes.

A Way Forward in Haiti, a network of Haitian diaspora faith and community leaders, launched a new advocacy campaign called “U.S. Hands Off Haiti’s Democracy.” With a petition and organizational sign on letter, the campaign asks for one fundamental change in U.S. policy toward Haiti: allow Haitians to lead their own democratic process.

“We call on the United States to stop supporting Prime Minister Ariel Henry, and the PHTK party and its political affiliates, so that a Haitian solution to the crisis can emerge,” the petition and letter read.

The diaspora leaders say that Haiti’s crisis is the direct result of the decade-long rule of the Pati Ayisyen Tèt Kale (PHTK) party, beginning with President Michel Martelly in 2011.

“There hasn’t been an election in years and gangs rule the land,” said campaign leader Johnny Celestin.

The Haitian activist described the crisis during a meeting with faith groups to introduce the campaign: “There is no parliament, no elected officials, so looting is happening. The party in place has diverted funds to itself, and the depletion of funds has shrunken space for civil society to build community. Corruption and mismanagement have caused Haiti’s currency to depreciate over 30%, inflation is over 20%, and the World Food Program says more than 45% of Haitians face hunger, even before the Ukraine crisis.”

“Haitians need to talk to each other and find a solution to the crisis that has everyone at the table. This campaign is to ask the United States to step away and allow Haitians to control their own destiny,” Celestin said.

“We in Haiti can do it,” said Leslie Voltaire of the Montana group, a powerful Haitian opposition group that has demanded the United States withdraw its support for the government of Prime Minister Ariel Henry in Haiti, saying the administration has lost legitimacy by delaying elections.

Faith leaders at the meeting, many of whom signed a letter to the U.S. State Department calling for U.S. support of free and fair elections in Haiti, agreed. “We know Haiti can lead itself and European and U.S. partners need to leave them alone,” said Rev. Aundreia Alexander, Associate General Secretary of the National Council of Churches.

Despite the ongoing deterioration of security, governance, basic services and respect for human rights, the United States has continued to support the current Haitian government, which is dominated by the PHTK. The PHTK was founded by President Martelly after he came to power in 2011. The PHTK has controlled the majority of Haiti’s government for ten of the past eleven years.

The campaign describes Haiti’s crisis as the “direct result of that decade of PHTK rule” and U.S. support of the PHTK government as a barrier to democracy.

In recent years, Haitians have been fighting to reclaim their democracy with a broad-based nonviolent mobilization against the PHTK governments, the campaign says. But, they say, “U.S. government support has allowed the PHTK to refuse to negotiate in good faith with the popular democratic movement demanding change.”

Campaign leaders acknowledged that there is a bill in Congress that is in line with the campaign principles, but they are not hopeful it will lead to change. “The challenge is the White House and Ambassador Brian Nichols playing it both ways,” the campaigners said, referring to public comments by the Assistant Secretary of State for Western Hemisphere Affair in which he named combating the gang problem and paving the way for elections as the top two U.S. priorities, though little has been done to advance either one.

The campaign organizers blame U.S. waffling for “keeping the current Haiti government comfortable,” and they hope this campaign “will move the U.S. Administration forward with the Montana Accord.”

“We need united advocacy to be affective,” said Melinda Miles, an expert on human rights and the environment in Haiti. In addition to the petition and organizational sign on letter, Miles said the campaign plans to offer an advocacy tool kit building up to a Day of Action on Haitian Flag day on May 18.

Faith in action: Sign the petition at https://bit.ly/3vtWaoY. Follow the latest updates from the Maryknoll Lay Missioners in Haiti:  https://mklm.org/category/haiti/