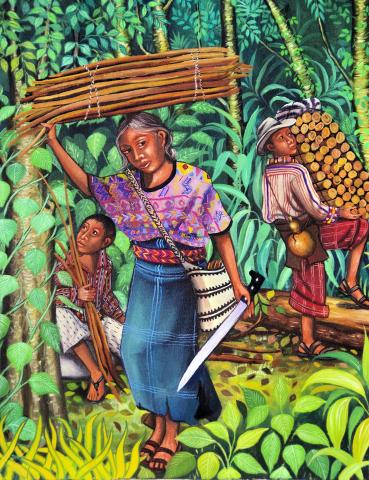 An international campaign for alleviating poverty and suffering in Guatemala has launched a petition calling for new targeted sanctions by the United States. The following article was published in the July-August 2022 issue of NewsNotes.

The Root Causes Initiative is a network of faith-based and grassroots organizations in Guatemala, Honduras, El Salvador, Mexico, and the United States working to change the underlying conditions that cause poverty and suffering in Central America and force people to leave their homes.

The Initiative offers the following invitation to the public:

“Join us in demanding that the United States end its support for Guatemalan President Alejandro Giammattei, impose tough financial sanctions on top officials and oligarchs responsible for forcing more than two dozen independent judges, prosecutors, and civil society leaders into exile, and use U.S. influence with the IMF and other international lenders to block new loans, which only fuel corruption and electoral manipulation.

Statements and visa sanctions are not sufficient.

President Giammattei and his Attorney General Consuelo Porras have systematically persecuted judges, prosecutors, and civil society leaders for having the courage to hold officials and business elites accountable for corruption and human rights abuses

Guatemalan indigenous and civil society leaders are leading a broad movement to restore democracy in Guatemala. Their efforts are critical to addressing the root causes of migration and improving living conditions for the most vulnerable people in Guatemala. They need our support!”

The petition reads as follows:

We urge you to stand with Guatemalans who are struggling to restore democracy and the rule of law in their country by ending U.S. support for the Giammattei regime, imposing tough Global Magnitsky Act financial sanctions on high-level officials and oligarchs who have conspired to force more than two dozen independent judges, prosecutors and civil society leaders into exile, and use U.S. influence with the IMF and other international lenders to block new loans, which only fuel corruption and electoral manipulation.

The decision by President Giammattei to reappoint Attorney General Consuelo Porras to a second term is an outrage to the people of Guatemala. Visa sanctions and public statements are insufficient to reverse the destruction of rule of law in Guatemala.

The U.S. must take the next step by imposing Magnitsky sanctions on Guatemalan Attorney General Consuelo Porras, top officials in the Giammattei government, and the oligarchs who have conspired to gut the Guatemalan judicial system. Doing so will send a clear message that the U.S. recognizes that rule of law is a prerequisite for addressing the root causes of migration and improving living conditions in Central America.

For more than two decades, Guatemalan indigenous and civil society organizations have courageously led a broad movement to defend the rule of law and human rights in their country. The unwillingness of the former U.S. Administration to speak out against the closing of the International Commission Against Impunity in Guatemala (CICIG) was a terrible blow to the struggle for democracy in Guatemala, which has been followed by further abuses under President Giammattei.

Today, at this pivotal moment, the Biden-Harris Administration must show the world that it consistently supports democracy and human rights by standing with the Guatemalan people in their struggle against impunity.