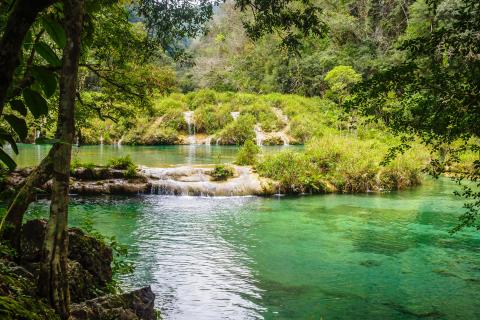 A Mayan land rights case against the Guatemalan state has reached the Inter-American Court of Human Rights in San José, Costa Rica. The following article was published in the March-April 2022 issue of NewsNotes.

On February 9, Rodrigo Tot, who was awarded the Goldman Environmental Prize in 2017, testified at the Inter-American Court of Human Rights in Costa Rica, in a historic land rights case against the Guatemalan state.

According to the North American Congress on Latin America (NACLA), the court’s ruling could force the Guatemalan government “to finally recognize the Q’eqchi’ people’s collective rights to their ancestral lands and their right to protect their natural resources from exploitative megaprojects” – referring to the open-pit Fénix nickel mine, run by a Guatemalan subsidiary of the Switzerland-based Solway Investment Group.

The plaintiffs in the case, the Maya Q’eqchi’ community of Agua Caliente, have been resisting for decades the exploitation of their land on the banks of Lake Izabal by multinational corporations, enabled by state repression.

This is the first time Guatemala has faced judgement in an international court for violating the ancestral land rights of Indigenous communities. If the community’s case prevails, it would set a new precedent for Indigenous land and resource rights.

According to NACLA, a ruling in favor of the Maya Q’eqchi’ community of Agua Caliente “could offer not only reparations for Agua Caliente, but also new legal tools for Q’eqchi’ communities in the region in their fights against other catastrophic megaprojects and monocrops, including African palm plantations.”

“The community has decided to fight, and that’s why I’ve given my life to fight for them,” Tot told NACLA. “I want Guatemala to recognize the harm it’s caused us. And I want to ask [Indigenous] communities, not only in Guatemala but in other countries, to unite. This is a valuable struggle that’s worth fighting for.”

Faith in action: Listen to Maryknoll Sr. Dee Smith talk about her more than 30 years of ministry in Guatemala. https://bit.ly/3vmNDnV