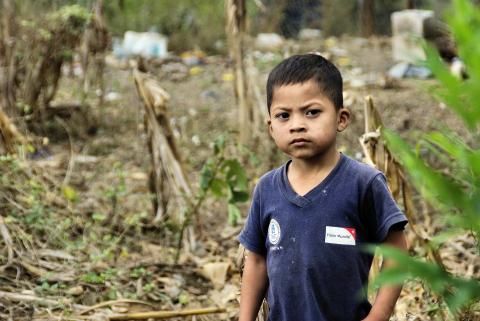 Guatemalan groups expressed disappointment with Vice Pres. Kamala Harris’s visit to the country in June. This article was published in the September-October 2021 issue of NewsNotes.

Vice President Kamala Harris’s June visit to Guatemala and Mexico was meant to highlight the Biden administration’s plan to address the root causes of U.S. immigration, particularly from Central America’s “Northern Triangle” of Guatemala, Honduras, and El Salvador. But community leaders from the remote Guatemalan department of El Petén worry that U.S. authorities have not yet demonstrated a willingness to tackle the deep and complicated roots of such migration, which inevitably involve the violent history of U.S. interventionism and economic interests in the region.

Vincentian Father Flavio Tercero, who worked for many years in El Petén (including with Maryknoll Brother Marty Shea), and Guatemalan lawyer Ramón Cadena recently spoke with the National Catholic Reporter (NCR) about a statement they wrote (excerpted below) in anticipation of Harris’ trip. In detailed and pointed commentary, NCR’s Tom Roberts reports that Cadena appreciated Harris’ emphasis on the need for Guatemala to care for its people, end corruption, and stop human trafficking, but that “he was disappointed at the limited contact she had with grassroots groups and representatives.”

During the 39-year Guatemalan civil war, subsistence farming families were relocated to El Petén from other regions by the government.

Then, in the 1990s, the land was declared a protected area. The new law meant that oil interests and other large-scale “mega-projects” from dams to eco-tourism can operate there, but the farmers cannot.

Given no recourse and nowhere else to go, families in El Petén are violently and systematically displaced. Burned out of their homes, their crops destroyed, pursued by the military, they are precisely the kinds of desperate families who often migrate through Mexico to the United States. According to Tercero and Cadena’s statement, as of 2019, El Petén had the fourth largest rate of emigration of the regions of Guatemala. Yet, despite repeated requests, the El Petén regional representatives were not represented among the groups Vice President Harris met with, while groups more closely aligned with powerful state and private interests were.

The snub was nothing new. In August, MOGC staff spoke with Tercero, Cadena, and a handful of community leaders from El Petén who asked not to be named because they could be targeted by military and paramilitary groups in the region. They recounted decades of attempts to call international attention to their plight, only to be ignored by officials from the United States and other embassies, the United Nations High Commission, and Guatemala’s Catholic hierarchy.

The leaders from El Petén say that U.S. efforts to address the root causes of migration must consider the experience and insights of communities like theirs, or else money aimed at economic improvement will only fuel corruption, impunity will continue to enable their persecutors, and desperate families fleeing violence will continue to seek refuge in the United States.

As long as their voices are ignored, one leader told MOGC, “When Vice President Harris says to Guatemalans, ‘Do not come,’ we do not hear the message that we should stay in our country to build a better future. The message we hear is that the poor and victims of violence have no value, and we will be punished.”