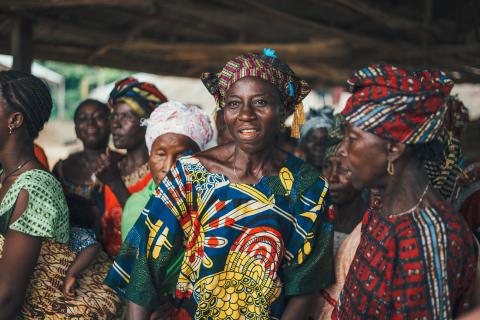 A new report highlights priorities for the African continent for 2022. The following article was published in the March-April 2022 issue of NewsNotes.

In January, the Brookings Institution released its report, “Foresight Africa,” on the top priorities for development on the African continent for 2022. In the preface for the report, Aloysius Ordu, director of the Africa Growth Initiative at Brookings, wrote that, despite significant challenges, “There are reasons to be cautiously optimistic about Africa’s future.”

Commenting on the report’s findings at a virtual launch event, Ameenah Gurib-Fakim, former President of Mauritius, called Africa the “paradox continent,” given that it has 20% of the planet’s land area, 60% of the world’s river line, 30% of the world’s reserve of minerals, the world’s youngest population, but low levels of economic growth and global trade levels.

“Despite all these riches,” she said, “the continent produces only 3% of global GDP, accounts for less than 3% of international trade, mainly commodities and natural resources. And shoulders 25% of the global disease burden.” She urged leaders to come together to work with what Africa has to offer and ensure the flourishing of the continent.

In addition, Africa supplies the world with rare metals used in electronics, such as lithium, copper, and cobalt, but has no local industrial infrastructure and needs investment in schools and technology. It also must reverse the brain drain.

In terms of economic recovery, the report states that there are good prospects for 2022, with the IMF predicting 3.8% growth for Sub-Saharan Africa as a whole.

The report emphasizes three “latent assets” of African culture that will contribute to this positive trajectory. The first is meritocracy: they argue that African societies are built on achieved rather than ascribed status. The second is cosmopolitism, or the idea that Africans have traditionally been intertwined with many heterogeneous ethnic groups, making them the most able culturally to cope with the modern, globalized world. Finally, the authors argue that an attitude of skepticism towards authority will help African societies to avoid falling for the types of charismatic populists seen in Latin America.

There are painful lessons from the pandemic, however. The authors argue that the lack of international solidarity and glaring vaccine inequity show that Africa needs intra-continental solidarity and health systems that are self-sufficient.

As of this year, 9 billion vaccine doses have been produced globally, but Africa has received only 540 million, and only 11% of the continent’s population have been fully vaccinated. However, the African pharmaceutical sector is expected to grow from $16 billion in 2012 to $66 billion this year, and eventually to $259 billion by 2030. Currently Africa produces only 1% of medicines and vaccines that it consumes. In response to this problem, African leaders plan to create a decentralized, diversified manufacturing sector with the help the Africa CDC and the Africa Medicines Agency (AMA).

GAVI,  (Global Alliance for Vaccinations and Immunizations) has committed $155 million over three years for malaria vaccinations, but the Foresight Africa report criticizes this, saying it prolongs African dependency on outside solutions and dampens incentives for Africa to develop its own institutions. This report recommends that vaccine production financing come from African domestic budgets, with the goal of Africa producing 60% of its vaccines by 2040.

The report recommends several strategies for empowering women and girls, beginning with greatly expanding the initiatives already begun in STEM education for girls. Ellen Sirleaf Johnson, former President of Libera, argues in the report that, especially during the pandemic, African women leaders demonstrated their capacity to “pivot” and address the challenges at hand.  “The pivot is an art form that women leaders have perfected globally, Johnson said, “making them critical problem solvers that are more responsive and effective during times of crisis.”

About the climate crisis, “Foresight Africa” argues that the continent has shown resilience and demonstrated solidarity at the UN Climate Talks COP 26, initiating successful local and national responses to climate mitigation and adaptation, and obtaining increased global commitment to climate finance.

Finally, the authors argue that the technological revolution presents some challenges as well as opportunities for Africa. According to Landry Signe, Senior Fellow at Brookings, the continent “must improve its infrastructure and prepare its young workforce for new technologies to avoid asymmetric growth between it and the rest of the world. The future of Africa depends on its success in this endeavor.”

Perhaps most concerning to the authors is the persistence of “hot spots” across the continent, countries where coups have occurred, civil conflict continues and good governance is lacking. At the launch event, Greg Mills of the Brenthurst Foundation in South Africa called this the “democratic regression” and said it is essential that the continent address it.

Find the report at https://brook.gs/3tkj8fP