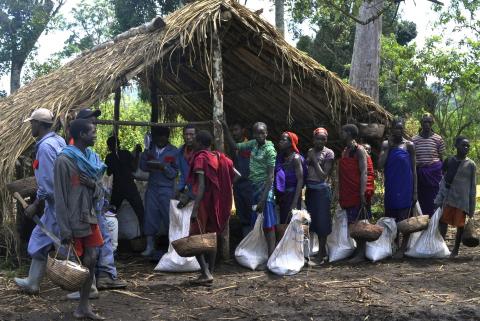 On Nov. 17, 2021, Advocacy Network for Africa (AdNA), Sojourners, and TASSC issued a joint statement about the violent conflict in Ethiopia that includes recommendations for short- and long-term actions for building peace. The following article was published in the January-February 2022 issue of NewsNotes.

Three international civil society organizations concerned with the growing violent conflict in Ethiopia called on the parties to the conflict to “cease hostilities, allow for unrestricted humanitarian access and ensure that human rights for all Ethiopians are respected and protected.” Advocacy Network for Africa (AdNA), Sojourners, and the anti-torture group TASSC declared in a joint statement released on Nov. 17 that “there can be no victory through force of arms and perpetuation of the war will burden the people of Ethiopia with bearing the terrible cost of this conflict for generations.”

The organizations acknowledge the suffering of citizens located in the conflict area in the northern region of the country, as well as those elsewhere in Ethiopia left destitute by a war effort that uses up desperately needed public resources. They go on to express grave concerns for the life and the livelihoods of people in conflict area, based on limited reports by human rights groups and international media of massacres of civilians.

In the short term, AdNA, Sojourners and TASSC call for all parties and peoples in Ethiopia to “respect human dignity and honor international and regional human rights standards and humanitarian law” by taking the following steps:

1. Immediately end hostilities and support a negotiated ceasefire. This must include independent verification that all Eritrean troops have withdrawn from all parts of Ethiopia.

2. Take immediate steps to ensure that individuals are safe, and that the rights of all Ethiopians are respected and protected.

3. Secure immediate and unrestricted access for humanitarian organizations including the creation of humanitarian corridors to allow humanitarian assistance to facilitate the distribution of food and health services to people in Northern Ethiopia and to other disenfranchised communities who have been exposed to famine conditions as a result of this war.

4. Call for an inclusive national dialogue process to be launched immediately, supported by the international community, with all political parties and stakeholders participating, convened by a neutral party to deliberate on a peaceful transfer of power to a coalition government that does not include leadership by either belligerent party.
In the long term, the three organizations call on the international community to...

5. Establish independent commissions to investigate ongoing human rights abuses committed by all parties to the Tigrayan conflict and by government forces in other parts of Ethiopia and attend to the plight of minorities in all regions.

7. Press the government of Ethiopia, whether in the hands of Prime Minister Abiy Ahmed or post war transitional council, to halt brutal crackdowns on opposition groups and open up civic space.

8. Press the Tigray Defense Forces (TDF) and allied forces to investigate and hold accountable persons linked to human rights abuses including those linked to acts of gender-based violence and rape, assassinations and extrajudicial executions.

9. Encourage the United States and other donor countries to ramp up the provision of humanitarian medical aid, particularly for survivors of gender-based violence, by supporting health centers, establishing safe houses and providing counseling services.

10. Urge the UN to call on the International Criminal Court to open an investigation for the purpose of identifying for criminal prosecution those responsible for atrocities and human rights abuses, in particular, the use of targeted sexual violence in Ethiopia.

Faith in action: Share this video of Bishop Medhin of Tigray calling for the end to the violence: https://bit.ly/34dSDQe