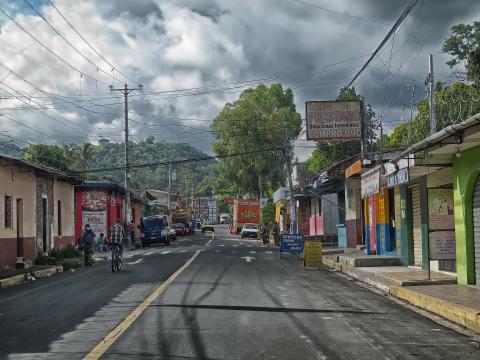 The Washington Office on Latin American released the following statement, excerpted here, on Dec. 9, 2021, entitled “On 40th Anniversary, Search for Justice in El Mozote Massacre Must Continue.”  The following article was published in the January-February 2022 issue of NewsNotes. Read the whole statement at https://bit.ly/ElMozWOLA

Since Salvadoran President Nayib Bukele took office in June 2019, and particularly since May of this year when Bukele’s Nuevas Ideas political party began the new legislative session with a qualified majority, attacks on judicial independence and rule of law in El Salvador have been of increasing concern. These attacks have presented yet another barrier in the 40-year search for truth and justice in the 1981 El Mozote massacre in which over a thousand men, women, and children were brutally murdered by Salvadoran soldiers. While achieving justice for those who died and the survivors is important in and of itself, the case also represents a test of the strength and independence of El Salvador’s judiciary and the country’s peace accords, both of which have been severely undermined under Bukele.

Even though El Mozote residents and surrounding communities were largely apolitical, troops rounded up community members, and over a three-day period, carried out what became the largest single massacre of civilians in modern Latin American history. They executed over a thousand people, hundreds of whom were children.

In remembering the massacre, honoring its victims, and acknowledging that the battle for justice is still being fought 40 years later, it is also important to analyze not only the role of the Salvadoran government, but that of the U.S. government as well. In addition to the millions of U.S. dollars being spent on El Salvador through military aid at the time, and the U.S. training of Salvadoran battalions, including the Atlacatl battalion that carried out the El Mozote massacre, this past spring it was revealed that the U.S. had even more direct involvement in the massacre. A testimony by expert witness Terry Karl demonstrated that a U.S. military advisor was in Morazán with a commander of the Atlacatl Battalion during the massacre and that he was likely aware beforehand of what was being planned. This expanded public knowledge of the extent of U.S. involvement in the war and provided additional context to the U.S. government’s coverup of the massacre. As Karl explained, had the U.S. advisor’s presence been known at the time, U.S. aid would have been cut off to El Salvador as it violates our laws.

Although the United States has provided some documents and materials related to the case, as recently as last year U.S. officials were still contributing to the delay of justice by not responding to Judge Jorge Guzmán’s request to declassify U.S. military documents related to the massacre. Even with the inclusion of provisions requiring U.S. cooperation on the case in the reports accompanying recent appropriations bills for foreign assistance and the House version of the 2021 National Defense Authorization Act, little progress has been made.

Gaining access to important military records has also been impeded in El Salvador. In September 2020, a court-ordered inspection of military archives was violated when the Ministry of Defense ordered soldiers to block a judge and inspectors from entering the armed forces headquarters and searching the military archives. President Bukele, who had previously promised to open them, supported the military’s refusal and accused the judge of succumbing to political interests.

Bukele’s shift in policy is not surprising given his recent attacks on democracy and judicial independence. This year, on the 29th anniversary of the peace accords, Bukele dismissed the agreements, rejecting the institutional foundation of Salvadoran democracy and further solidifying his strategy to erode checks and balances and empower the armed forces. This was followed by consecutive attacks on the rule of law and efforts to co-opt the country’s judiciary. In addition to unlawfully replacing all five magistrates on the Constitutional Court and the attorney general, and issuing a ruling to allow presidents to run for consecutive reelection, Bukele-allied legislators also approved reforms that dismissed around 160 prosecutors and judges based on their age or how many years they had been in service. This judicial purge ultimately resulted in the dismissal of numerous judges handling highly sensitive cases, including Judge Jorge Guzmán who had presided over the El Mozote massacre case for many years. This purge delivered a severe blow to accountability in historic human rights cases and undermined the progress that had been made in the El Mozote case.

Despite severe setbacks in the El Mozote case and the larger fight for democracy and rule of law in El Salvador, the search for justice for victims of the massacre persists...