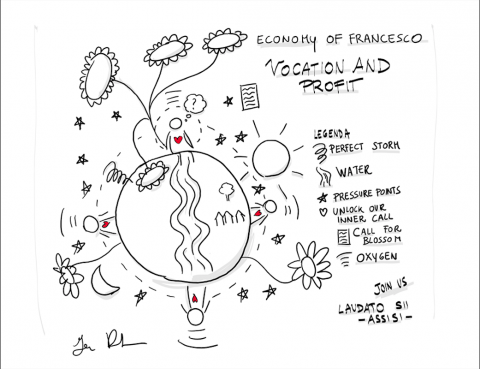 The Economy of Francesco, Pope Francis’ initiative for young people committed to reimaging a just economy, will convene a global virtual gathering on October 2. Read more about the Economy of Francesco: https://bit.ly/3Dy8Dd9. This article was published in the September-October 2021 issue of NewsNotes.

Two years after its founding, Pope Francis’ Economy of Francesco initiative is alive and thriving. The initiative, begun by Pope Francis in May 2019, is an opportunity for “all young people who feel called to commit themselves to an economy attentive to the least and capable of caring for the planet, to build together a process of global change and give life to a new season of economic thought and practice.”

Economy of Francesco unites young entrepreneurs, economists, and change makers to share experiences of their grassroots initiatives for economic transformation, to build alliances, and to share pathways toward a better world. This second year of the initiative has included a flurry of activities, with events ranging from workshops to webinars, entrepreneurial trainings, summer schools, and direct actions, all in preparation for the second global meeting on October 2.

The final document of the Economy of Francesco’s first global meeting in November 2020 established 12 themes or “villages” to guide the initiative’s work. The villages represent key areas where transformation is needed to create a truly sustainable and just economy and society, such as the sharing of technologies, decent work for all, the end of tax havens, equal opportunities for women, and the end to war.

All 12 villages have worked to define their priorities for future initiatives that will be further clarified in the October meeting.

The villages are transparent about their processes and progress in defining goals and planning for implementation. For example, the Policies and Happiness village has shared information about how they developed their three main proposals for action. They share notes and “mind maps” from their meetings, as well as videos of their discussions with global thought leaders, such as Indian scholar and activist Vandana Shiva and American economist Jeffrey Sachs.

The three main proposals from the Policies and Happiness village so far are 1) to create small-to-medium sized sustainable cities focused on local ecology and sustainability; 2) to create a Child Flourishing Index to help guide decision makers to best benefit future generations; and 3) to engage in what they call participatory, inclusive mapping, or to map the assets, connections and relationships within communities in order to foster local collaboration and a sense of belonging.

The different villages’ proposals are wide-ranging in scope and topic. The Energy and Poverty village suggests the formation of Casas di Francesco, communities of mixed ages and backgrounds where people can live out the Economy of Francesco, serving as places of innovation for Economy of Francesco ideas and local catalysts for change.

Another group, the Business and Peace village, proposes removing weapons producers from stock exchanges and increasing the number of universities with Peace Economics disciplines. As more villages submit their work and proposals you can read them here:
https://bit.ly/3yrr13K.

While the Economy of Francesco mostly focuses on economic issues, its members, moved by the concerning situation in Afghanistan, called for global mobilization on Saturday, August 28, to show solidarity with Afghan women. They invited participants in marches and other visible actions around the world to use the symbol of a piece of blue cloth to represent the more constraining type of burqa favored by the Taliban that may soon be forced on Afghan women.

The Economy of Francesco has an archive of videos of their activities around the world where you can find rich discussions with many of the world’s leading thinkers in different areas related to economic and social transformation. The videos provide a sense of the hopeful energy and potential of these young people acting to create a better world.