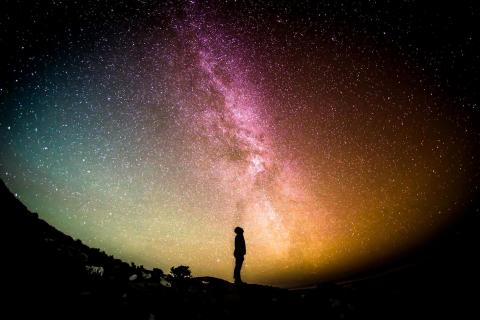 Sister Margaret Lacson, MM, describes her experience with the Deeptime Leadership and Wellness Course offered by the Deeptime Journey Network, a Princeton, New Jersey-based nonprofit focused on building a community that “understands the universe as a primary context.”

As I was discerning and eventually was assigned to  mission service at the Maryknoll Sisters Center in New York, a fellow sister strongly recommended to me a nine-month online course called “Deeptime Leadership & Wellness Program.” The program is a series of three modules and the first one – Introducing the New Cosmology – started on September 21 and ended December 16, 2022.

This one sentence is key to the content of this first module. I know of Darwin’s Theory of Evolution and my perspective had already been informed by the Big Bang theory. But this course put them into a more complete picture for me. Thomas Berry refers to it as “the new story” – The Universe Story.

The story of the Universe begins at the first primordial spark, going through billions of years of evolution, from gas to stardust, to galaxies and planets, from rocks to living things, from one-celled organisms to the complex biosystems of the present day, and from a living planet to a thinking planet. Understanding the movement of the Universe from simplicity to complexity helps us humans to understand our place and role in the Universe.

In the course we learned principles of Deeptime Learning. We delved into four in the first module: (1) the evolving Universe is the context of all that exists; (2) Earth is the matrix of all life that is inter-related and inter-dependent; (3) each and all in the Universe has its own particularity–a subjectivity; each one evolves and participates in the total evolution of the Universe; (4) when we understand context, matrix, and subjectivity, we are led into meaningful action that allows the humans to aid the Universe in its process of further evolution.

To learn about the Universe Story we engaged with Thomas Berry’s thinking that the Earth’s evolution is moving from the Cenozoic Era to the Ecozoic Era: it is hard to comprehend how humans, in the short time they have existed on the Earth, 200,000 years of the 13.8 billion years of the Universe – have managed to destroy much of the biosystems and the living organisms within them.

Berry proposes that we are now entering into the Ecozoic era – the fourth biological era – and that we must enter into it consciously with a fundamental shift in the relationship of humans to Earth.

Understanding our dependence on Earth’s generative systems, humans must change their perspective, “re-shape cultures and institutions to work in creative partnership with the structure and dynamics of the biosphere.” This is how we humans participate consciously in our evolution as humans and in the evolution of the Universe. For Berry and for many scientists and cosmologists, this is the way we can save the ailing planet, by moving towards right relationships with the Earth, our one and only source of life.

The key lesson for me in the first module was this: The Universe that evolved from the primordial spark brought forth a living planet, which brought forth living creatures, the latest of which is humans. We are part and parcel of this evolution, and through us, the living Earth has become a thinking planet.

The challenge to us in this present time is not only to change our lifestyles to help the environment but also to change our collective perspective – from one that allows humans to exploit the Earth’s resources in the name of civilization, progress, and greed, to one that understands human beings as part of this one Earth, this one Universe; that we are not separate and that our well-being depends on the well-being of the Earth. We can do this individually but, in the call of re-shaping cultures and institutions, it is vital that this is done widely, by groups of peoples, by institutions, by countries, and hopefully by the whole human race.

The Deeptime Leadership and Wellness Course continues with Module 2 in January. Five Maryknoll Sisters in Japan and Korea and three more at our Sisters Center in New York are participating in the program to help us deepen our Congregational perspectives on a One Earth Community mission vision which we aspire to live out as Maryknoll Sisters. The Deeptime Perspective gives us a common base and language as we explore further our place among the humans of this One Earth Community.

Read the Global Sisters Report on the modules at https://mogc.info/Deeptime