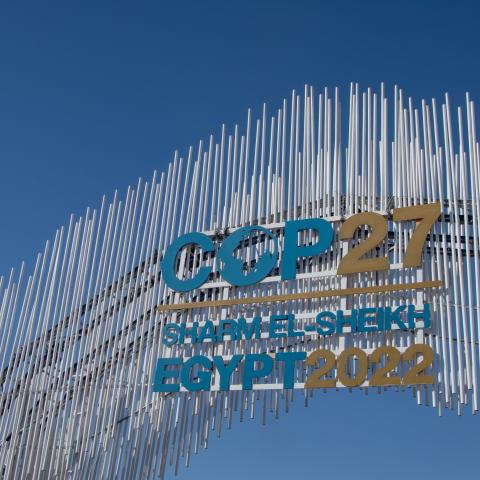 The fate of our common home, this fragile planet, was placed again in the hands of those who gathered in November, for the 27th time, at the UN Convention on Climate Change, this time on African soil, in Egypt.

Some 190 countries sent delegations to the UN Climate Talks COP27 in Egypt this past November, from Afghanistan to Zimbabwe, representing Earth’s eight billion people. Such a successful attendance rate for one meeting is no small feat. Perhaps it was due to the wakeup call of the Earth itself, speaking in the language of floods, heatwaves, droughts, and wildfires.

It was the newest and smallest member of this forum, the Vatican, that seemed to lay out the task ahead most clearly: “either we win together, or we lose together.” This was the message of the Holy See Secretary of State, Cardinal Pietro Parolin at the start of the conference.

Those who have been the traditional losers in this battle, those for whom climate change is not tomorrow but today, achieved the most significant victory of the conference thanks to their sheer refusal to be ignored. Small island-states that are being swallowed by rising oceans joined other nations that are being drowned or scorched by climate catastrophes to demand reparations. The result was a surprise eleventh hour historic agreement to establish a Loss and Damage Fund, adding a fourth pillar to what Cardinal Parolin named as the essential elements to solving the climate crisis: mitigation, adaptation, finance, and loss and damage.

Details of this new fund are yet to be determined, but it was a step toward restorative justice, acknowledging that wealthy countries, whose wealth was created through the burning of fossil fuels, have a debt to poorer nations who have contributed little to climate change, yet suffer its effects most accutely. One example is Pakistan, a third of which was inundated this year by floods caused by climate change. Pakistan has emitted only 0.3 percent of the world’s cumulative carbon emissions, compared to the U.S.’s 24.3 percent.

The creation of a Loss and Damage fund was seen as a major step forward for climate justice. Unfortunately, progress on moving the global economy away from fossil fuels stagnated. Although over 80 countries (including the US and the EU) backed a proposal by India to phase down all fossil fuels and peak global emissions by 2025, their efforts proved unsuccessful.

As world temperatures are on track to warm above 2°C by 2030, this missed decision on emission reductions puts in danger the goal to “keep alive the 1.5” of the 2015 Paris Agreement. Every fraction of a degree of global warming unleashes catastrophic weather events that cause immeasurable suffering.

The United States arrived at the global gathering hopeful of a new leadership role, fresh from the passage of the Inflation Reduction Act, the most sweeping U.S. climate bill ever, promising to reduce U.S. greenhouse gases by 40 percent. But the parsimony of the world’s largest historic emitter of greenhouse gases in offering only pennies to global adaptation and mitigation efforts deflated their standing. Although President Biden promised to contribute 11.4 billion to international climate finance in 2022, Congress dashed his hopes, approving only one tenth of that amount.

While the United States has not been forthcoming with financial commitments, one victory at COP was to open space for dialogue on new and creative sources of climate finance, such as debt swaps for climate initiatives. There was much talk about the Bridgetown Initiative which proposes an overhaul of major development banks to drive trillions of dollars toward climate solutions.

Another space opened both formally and informally was dialogue about climate and agriculture. Agriculture is both a casualty of climate change and a contributor. On the same continent as the UN conference, drought-induced hunger threatens more than 50 million people. Meanwhile, some twenty percent of deadly greenhouse gas emissions are attributed to industrial agriculture. Side events during the climate talks connected people and organizations seeking alternatives, such as agroecology, a practice which both builds resilience and mitigation to climate change.

The sparks that emerge from these side events are perhaps the real progress at the annual climate talks. The seeds of change are, after all, often birthed on the margins – a core tenet of our faith. As preparations for COP28 in the United Arab Emirates are already underway, let us hope that these seeds find fertile ground.

Photo by Matthew TenBruggencate via Unsplash