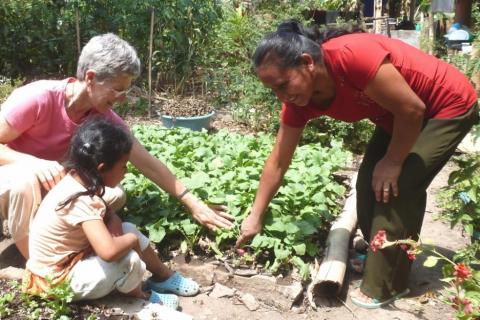 Inspired by the gospel and Maryknoll missioners’ commitment to stand with vulnerable communities around the world, we offer two-page briefs as resources on the intersection of global policy and Catholic social thought. Here is an excerpt. Find the complete policy brief at https://bit.ly/MOGCPolicyBriefs  This article was published in the November-December 2021 issue of NewsNotes.

In 2021, the UN Intergovernmental Panel on Climate Change released a shocking report on the latest climate data, saying we have reached a “code red for humanity.” These leading scientists say it is indisputable that human activities are causing climate change, making extreme climate events, including heat waves, heavy rainfall, and droughts, more frequent and severe – at a rate unprecedented in the last 2000 years.

These changes are prompting increased crop failure, food insecurity, forest fires, and sea level rise. And these conditions are driving migration, homelessness, loss of livelihoods and biodiversity. Climate change is altering our fundamental relationship with nature and each other.

Climate change touches all of our lives, but some people and places are affected more severely. Both in the United States and around the world, populations marginalized by gender, race, class, caste, religion, ethnicity, and ability are more vulnerable to climate impacts and less able to respond. Also, while high-income nations produce the bulk of emissions, low-income nations, which produce far less emissions, bear the brunt of climate impacts without the resources to respond.

The United States, the world’s wealthiest nation and highest emitter, has a unique responsibility to reduce emissions and assist low- and middle- income countries to transition to renewable energy and adapt to climate change. Examples include investing in solar panels, sea walls, and drought-resistant crops, as well as financing relocation for some communities.

In the report, scientists tell us that current emissions have made lasting damage but some warming can be reversed if countries work together to make deep and rapid emissions cuts. The best-case scenario is to keep the average global temperature rise to 1.5 °C (2.7 ˚F) above pre-industrial era levels, the goal set by the Paris Agreement in 2015.

As Pope Francis and more than 40 religious leaders said in their appeal to world leaders at the UN Climate Talks in Scotland, “We have inherited a garden: we must not leave a desert to our children.”

•    Climate change in the U.S. is projected to increase inequities, strain infrastructure and the electric grid, cause sea level rise and biodiversity loss, and disrupt agricultural patterns in the next few decades.
•    To limit warming to 1.5 or 2 °C , countries will have to cut their greenhouse gas emissions to net zero by around 2050. To reach that goal, emissions would have to start dropping “well before 2030” and be on a path to fall by about 45 percent by around 2030.
•    The earth has already experienced 1 °C of warming due to human activity and is on track to reach 1.5 °C by about 2040.

As typhoons and hurricanes hit parts of Asia and Central America, people have had to shelter together, increasing the risk of transmission. In the Amazon, smokey fires and COVID-19 compromised indigenous peoples’ respiratory systems, making them more sensitive to the health impacts of both. In East Africa, where very few have access to covid vaccines, millions of people are struggling to survive climate-fueled floods in South Sudan and droughts in Ethiopia, Somalia and Kenya.

“…[We] study and discuss Laudato Si’ in the rural parish [in El Salvador] where I live and we implement what we can through our agricultural and environmental ministries… The main effects of climate change here are the abnormally extreme wet and dry seasons and catastrophic storms that result from altered weather patterns. Insufficient or excessive rainfall leads directly to hunger among the poor...”– Peg Vamosy, Maryknoll Lay Missioner

All-powerful God, you are present in the whole universe and in the smallest of your creatures. You embrace with your tenderness all that exists. Pour out upon us the power of your love, that we may protect life and beauty. Fill us with peace, that we may live as brothers and sisters, harming no one. - Pope Francis, Laudato Si’

Sign up to receive our action alerts to tell your elected officials to care for Creation.

Join the Laudato Si Movement to connect with Catholics around the world.

Connect with U.S. Catholics at the Catholic Climate Covenant