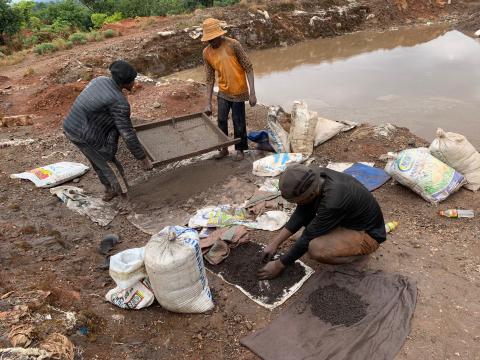 The growing demand for minerals used in renewable energy raises the urgency to address human rights and environmental abuses common in mining. The following article was published in the July-August 2022 issue of NewsNotes.

To avoid raising global temperatures more than 1.5 degrees Celsius many millions of batteries, solar cells, and wind turbines will need to be made, all of which depend on six key metals known as “transition minerals”: copper, cobalt, lithium, manganese nickel and zinc. The International Energy Agency predicts that a mid-century zero-carbon world will require a more than sixfold increase in the production of these minerals by 2030.

To do this, existing mines will need to be enlarged and many new mines opened. Historically, mining operations have been the source of the worst human rights and environmental abuses on record and have generated much conflict. If the  mining industry is to grow as predicted, companies will need to reform their practices and include impacted communities in decision making before and during the mining process.

The average electric vehicle (EV) battery with a 60 kWh capacity, such as the Chevy Bolt, contains almost 185 kilograms of minerals: 52kg of graphite, 29kg of nickel, 20 kg of copper, 6 kg lithium, etc. Considering that concentrations of these minerals in ore range from 0.03% to 10%, considerable amounts of Earth must be displaced to mine these minerals. One estimate is that 500 kilos of Earth are extracted and processed for every kilo of useable mineral, meaning that a single EV car battery would destroy close to one ton of Earth.

On a positive note, most transition minerals in batteries are relatively easy to remove and recycle. Eventually, most batteries will be made from recycled materials, but scientists say that technology is at least one to two decades away. In the meantime, there will be a marked increase in mining around the world.

Many of the new mines will impact indigenous communities as those communities control an estimated 25 percent of land in the world and a much larger portion of the world’s preserved lands. The United States plans to increase domestic production of transition minerals and the vast majority of untapped areas containing these minerals lies within 35 miles of an indigenous reserve. Similar numbers are seen around the world.

Mining companies have a long history of ignoring the concerns of local communities as documented by Maryknoll missioners around the world and by the Business & Human Rights Resource Center’s Transition Minerals Tracker. Even though several international treaties and institutions require upholding the principle of Free, Prior, and Informed Consent (FPIC) of affected communities for large infrastructure projects, many mining companies continue to force unwanted projects on communities without consultation.

To inform local communities and gain their consent for a project implies costs that some companies may consider excessive. Yet studies of mines around the world have shown that FPIC is not only a good thing to do and important for maintaining a company’s reputation but also necessary to guarantee the success of the project overall. Projects that are opposed by local communities face numerous added difficulties from reduced access to financing, increased construction costs and delays, operational delays, and increased production costs.

There are many cases where the lack of FPIC and resulting protests led to the closing of the entire project. For example, in 2003, Meridian Gold, a mining company based in Reno, Nevada, purchased land in Esquel, Argentina to create an open pit gold mine. Yet due to their lack of transparency and no involvement of the local community in decision making, protests against the project grew until the community was able to reject the proposal in a referendum. As a result, Meridian Gold lost the $379 million spent to purchase the land as well as access to the estimated $1.33 billion in gold reserves located there.

Governments, investors and civil society will need to remain vigilant in coming years and monitor mining companies to assure that they involve affected communities in all steps of the process. If not, we run the risk of creating new environmental and social destruction while addressing climate change.

As Atsa koodakuh wyh Nuwu (the People of Red Mountain) wrote in a statement of opposition to an open pit lithium mine in Nevada: “We understand that all of us must be committed to fighting climate change. Fighting climate change, however, cannot be used as yet another excuse to destroy native land. We cannot protect the environment by destroying it.”

Image: Cobalt mining in the DRC. Photo taken by the Flickr/International Institute of Environment and Development on December 9, 2020, CC BY 2.0