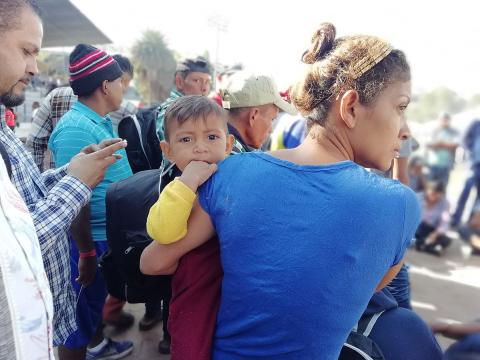 The Root Causes Initiative is working to address the underlying structural and historical conditions driving people to migrate from Central America. This article was published in the November-December 2021 issue of NewsNotes.

In December of 2019, Hope Border Institute and Faith in Action gathered with Central American and Mexican leaders in Mexico City to understand and process the exodus of children, families, and adults from the region in 2019. “We sought a deeper analysis of why so many had chosen to leave the places they love,” said Dylan Corbett, executive director of the Hope Border Institute, “and make a dangerous journey to a country that has taken unprecedented steps to keep them out and block them from accessing protection.”

“We came away realizing that fundamental change in U.S. policy is needed if we're going to help create a Central America where families can thrive, access good economic opportunity and live in safety.”

The resulting framework for planning and action, described on the Faith In Action website, has brought together hundreds of organizations and two dozen Catholic and Episcopal Bishops and other religious leaders from Guatemala, Honduras, El Salvador, Mexico and the United States, who have shared their lived experiences and analysis with each other and with the Biden Administration. Their goal is to change U.S. policies to create more peaceful, just communities in the region and to treat migrants at the U.S.-Mexico border with dignity.

One taskforce of the Root Causes Initiative is working on changing the mechanism that USAID has for financing projects in Guatemala, where, up until early September, the United States had been dumping thousands of expelled migrants in a remote town in the jungle along the border with Mexico. The U.S. policy to send deportees on flights to southern Mexico caused an outcry among human rights groups, including the Root Causes Initiative, after around 2,500 deportees, reportedly coming from nearly a dozen countries, were dropped at the small border outpost of El Ceibo, Guatemala, without resources to get home. After meeting with Guatemalan officials, the Biden administration agreed to send only Guatemalan and Honduran deportees and only on direct flights to Guatemala City.

The Root Causes task force on Guatemala wants to make civil society a priority with USAID in Guatemala. They aim to strengthen the ability of indigenous peoples, youth, and women to get funding from USAID. At a recent planning meeting, some advocates named the need to strengthen ties among Guatemalan civil society actors and those in neighboring countries like Nicaragua, in order to be heard over the voice of Mexico, which has the overwhelming attention of the United States in negotiations over the direction of U.S. investments.

Problems with USAID funding run deep. The Root Causes Initiative Steering Committee sent a letter of concern to Administrator Samantha Power on Oct. 19 after learning that “five months ago, on May 18, without transparency, USAID/OTI used a process designed for urgent acquisition of supplies and services to give a U.S.-based for-profit company a $135 million three-year no-bid contract to manage a Central America Regional Initiative.

The stated purpose of this project contracted to Maryland-based Creative Associates International by USAID’s Office of Transition Initiatives (OTI) is to "increase the ability of the most vulnerable communities and individuals to advocate for themselves and meaningfully improve their living conditions, increase perceptions of opportunity and fairness in economic and political systems, and contribute to the body of knowledge on how to effectively address the root causes of migration by developing and testing new theories of change."

The letter from the Root Causes Initiative says “These laudable goals focused on citizen empowerment, improvements in living conditions, and broader economic and political change have been a major focus of our conversations with USAID and other Biden-Harris Administration officials, and represent a positive shift from past security-focused approaches to addressing migration from Central America. However, they cannot be achieved without close partnership with civil society organizations that have deep knowledge and experience in the complexities of social and political change in their countries.”

The letter lists nine questions, including “Why was this decision not made public?”; “Why did USAID/OTI sign such a large contract with one for-profit company?”; and “Why did USAID/OTI not work through or consult with organizations in the region?”

Another activity of the Root Causes Initiative is a series of meetings of bishops of southern U.S. border areas and Central American countries. The seventh meeting was held Oct. 25-28 in Honduras. The goal of these meetings is dialogue to improve the communication between countries and among immigrant houses and churches so we work together to provide refuge.