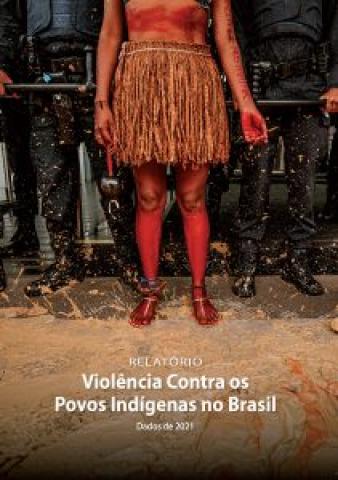 The Brazilian bishops say record-high violence and rights violations may have made 2021 the “worst year of the century” for Indigenous peoples. The following article was published in the September-October 2022 issue of NewsNotes.

A new report by the Brazilian bishops’ Indigenous Missionary Council (CIMI) describes the record-high number of invasions and attacks against Indigenous communities and leaders as a reflection of “the institutional environment of offensive against the constitutional rights of native peoples.” Released on Aug. 17, the report, entitled “Violence Against Indigenous Peoples of Brazil: Data from 2021,” says invasions and mining on Indigenous lands have increased by 180% since Jan. 1, 2019, when President Jair Bolsonaro took office.

As president, Jair Bolsonaro has carried out his campaign promises to diminish indigenous lands and open the Amazon for more mining and other types of exploitation. The result has been catastrophic for indigenous communities and the environment.

The Brazilian constitution of 1988 radically changed the government´s relations with indigenous populations. While previous laws aimed at “integrating” them into the rest of society, the new constitution recognized indigenous rights to land as original and in existence prior to the state and calls for the government to protect indigenous cultures, ways of life and livelihoods. The constitution established a five-year period to demarcate all indigenous lands, yet only 535 territories claimed by indigenous have been demarcated, with more than 800 territories awaiting official recognition by the government.

Bolsonaro´s first act as president was to rearrange federal ministries, placing the government’s Indigenous protection agency FUNAI under the purview of the Agriculture ministry, home to those who most covet indigenous lands for commercial farming. The change was later reversed by the Supreme Court, sending the agency back to the Justice ministry, but it showed the president’s intentions.

As a presidential candidate in 2016, Bolsonaro made his disdain for indigenous people clear in a number of disparaging remarks, even complaining, “It’s a shame that the Brazilian cavalry hasn’t been as efficient as the Americans, who exterminated the Indians.” He repeatedly promised that if he won the election, “there will not be one more centimeter of indigenous land” and that these lands needed to be opened to economic activities like mining, timber, agriculture, raising livestock, and tourism. Regrettably, this is one of his promises that he has followed through on; in three years not one territory has been officially recognized.

He has also followed through on his promise to “serve a blow to FUNAI, a blow to the neck.” Bolsonaro chose former federal police chief Marcelo Xavier da Silva, a close friend to large landowners, to lead FUNAI. He quickly filled the agency leadership with career police and military personnel, especially in the Amazon where they occupy 58 percent of coordinator roles vs. 27 percent in other regions.

Da Silva significantly changed the agency’s role in April 2020, declaring that the agency would only protect territories that had finished the process of demarcation, thus opening almost 25 million acres to conflict over ownership and leaving hundreds of communities without protection. This decision was also overruled by the Supreme Court, but the agency continues to be “transformed from a protection agency to one that exposes indigenous people and territories to different violations,” according to CIMI.

Since that declaration, FUNAI has certified 415 ranches containing nearly 600,000 acres in indigenous territories, and it is not only a question of some land overlapping indigenous lands. An investigation by Agencia Publica found that the majority of the ranches were 100 percent inside indigenous territories. While indigenous communities have been waiting decades for their lands to be recognized, these ranches were approved in a matter of days or weeks. For example, the Terena people in Mato Grosso do Sul have been waiting for demarcation for more than 40 years, but a 19,000 acre luxury resort had its claim for the same land approved in less than two months.

Deforestation in the Amazon and elsewhere set records each year and Bolsonaro aims to pave an old, often impassable road in the middle of the Amazon that will accelerate deforestation in the region significantly more. “The destruction is so vast now that the eastern Amazon, just east of Xingu basin, has ceased to be a carbon sink... and has converted into a carbon source,” according to a 2021 study published in the journal Nature.

In contrast to Bolsonaro, Pope Francis has described Indigenous peoples as a “living cry of hope” and a people who “know what it is to listen to the earth, to see the earth, to touch the earth.” They remind us that we have a shared responsibility to care for our common home. “And if certain decisions taken so far have ruined it,” he said, “it is never too late to learn lessons and acquire a new way of life.”

Photo: Cover of the report “Violence Against Indigenous Peoples of Brazil: Data from 2021” by CIMI.