Brazil: Deaths and Degradation in the Amazon 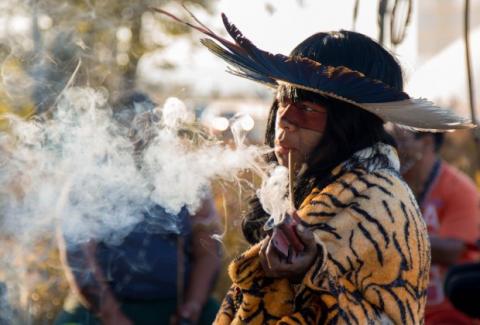 REPAM-Brazil demands a government response to the deaths of two leading defenders of indigenous peoples and nature in the Amazon territory. This article was published in the July-August 2022 issue of NewNotes.

The Pan-Amazonian Ecclesial Network (REPAM-Brazil), released a statement on June 15 after the bodies of veteran British journalist Dom Phillips and Brazilian indigenous expert Bruno Pereira, who had been missing for more than a week, were found in Brazil's Amazon rainforest. The two men were on a reporting trip in a remote jungle area near the border with Peru and Colombia that is known for lawlessness by a mix of illegal loggers, miners and hunters.

Signed by the three bishops who lead the network in Brazil – Bishop Evaristo Pascoal Spengler of Marajo, Archbishop Pedro Brito Guimarães of Palmos, and Bishop José Ionilton Lisboa de Oliveira of Itacoatiara – the title of statement, “NO to deaths and degradation in the Amazon” conveys the pain and outrage many in Brazil and globally feel about the continuing human rights and environmental violations in the Amazon region. It demands urgent action from the government in the face of deaths and degradation in the Amazon territory.

The statement is translated here from the original Portuguese:

“The Pan-Amazonian Ecclesial Network (REPAM-Brazil) expresses its concern and indignation about the disappearance of indigenist Bruno Araújo Pereira and journalist Dominic Philips. This situation makes explicit the reality of insecurity and threats in which people who defend others live in the Amazon, people who defend the rights of indigenous peoples and their territories and are committed to caring for and preserving the Amazon biome.

We also express, in this moment of apprehension and pain, our solidarity with the family and friends, organizations and journalists, committed to human rights and the rights and the causes of the Amazon. We express our gratitude to the indigenous peoples of Vale do Javari, through their organizations, for their solidarity, human sensitivity and recognition by those who support their struggles.

We are outraged by the constant threats and assassinations of indigenous leaders, quilombolas and riverbank dwellers, as well as the violation of the fundamental rights of people of good will, who have placed themselves at the service of human life and the environment.

REPAM-Brazil, committed to the defense of human life and Nature, vehemently requests the energetic action of the authorities to stop the illegality and exploitation of Nature in the Amazon, which has caused constant deaths.

We claim that all those who occupy positions of responsibility and power of intervention, whether in the political, social and economic, local, national and international scope, become guardians of Creation, of God's plan inscribed in Nature, guardians of the other and the Environment. Let us not allow the signs of destruction and death to guide the path our society must take for the beloved Amazon, an indispensable part of our Common Home.

Amazonia is like a member of our body. If it bleeds, we also bleed, if it suffers, so do we. It forms a living whole with all those who live in it. If it dies, we will be held responsible for the consequences that future generations will suffer.”

Two weeks later, bishops from Brazil, including the leaders of REPAM, met with Pope Francis for their ad limina visit at the Vatican, in which they reported on the systematic violations of human rights in the Amazon. “We can say that he has the Amazon at heart,” Bishop Bernardo Bahlmann of Óbidos said of Pope Francis, according to an article in the Brazil news service Urua Tapera.

Bishop Spengler, president of the REPAM-Brazil is quoted as saying, “We had to report to the pope the increasingly systematic attacks of destruction that the Amazon, its peoples, territories and leaderships have been suffering. The Amazon bleeds and dies before our eyes: invasions of indigenous, quilombola and riverine lands by mining companies, farmers, cattle ranchers, loggers and agribusiness. We ask the Pope, with his undisputed authority, to support a truce for the Amazon, a true sabbatical time of reflection to rethink the presence and coexistence in the Amazon.”

Bishop Spengler said, after telling Pope Francis about the deaths in the Amazon, he closed his eyes in an expression of pain and suffering and then asked, “What can we do?”

“He is very sensitive to this reality of destruction,” Bishop Spengler commented. “Pope Francis is the hope of the peoples of the Amazon. Our people deserve a time of peace, of security, a real time of grace from the Lord.”