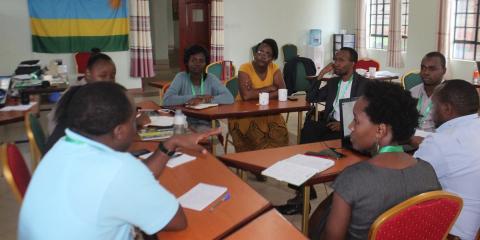 Community and religious leaders from across the African continent are meeting to discuss personal experiences and perspectives on key topics related to the UN Climate Talks.The following article was published in the September-October 2022 issue of NewsNotes.

As our planet loudly reminds us that time is running out to preserve our common home, the annual UN Climate Change Conference has never been more urgent. This year’s gathering (COP 27) in Sharm el-Sheikh, Egypt, brings an important focus to Africa, where Chika Onyejiuwa of Africa Europe Faith Justice Network says “communities are among the most vulnerable to climate change impacts in the world.”

Inspired by Pope Francis’ call for dialogue through a process called synodality and his Laudato Si’ encyclical, the international Catholic coalition for social justice known as CIDSE has convened a grassroots space of listening, learning, and raising up solutions to bring to this year’s COP. Co-sponsored by the Maryknoll Office for Global Concerns, climate leaders from the DR Congo, Mozambique, Nigeria, South Africa and other African nations have been meeting to share experiences and interchange local solutions. Religious organizations taking part include the Symposium of Episcopal Conferences of Africa and Madagascar (SECAM), the Laudato Si Movement, Ecclesial Network for the Congo River Basin (REBAC), Jesuits Conference of Africa and Madagascar, Caritas Africa and others.

“Already we are feeling dire climate impacts and people and ecosystems least able to cope are being hardest hit,” said Lydia Machaka, CIDSE Climate Justice and Energy Officer. “COP27 must deliver real and urgent climate action now and we must put our differences aside and unite towards protecting and preserving our common home!”

The virtual dialogues are organized around key themes of the global climate movement, such as false solutions, food systems, climate finance, loss and migration. A joint communiqué will be delivered to COP to eloquently paint this picture of African climate realities and powerfully raise up effective local solutions.

The first session, held in July, focused on the issue of false climate solutions. Panelists from Mozambique, Uganda, and the DR Congo shared concerns about the climate solutions proposed for and in Africa, namely that they do not protect and preserve environmental integrity nor promote climate resilience as intended but instead threaten the remaining natural resources in Africa, particularly in the Congo Basin.

“Our land is being attacked,” said Henry Muhiya, the coordinator in DR Congo for REBAC. He went on to share how wealthy nations scramble for the minerals needed in the transition to clean energy, and lands rich in these resources, such as in the DR Congo, find themselves suffering violence and displacement in the process.  True solutions, according to Muhiya, are not supported by governments but will come from aligning environmental and human rights interests together.

Another much-bandied climate solution – that of forest conservation – was debated by those being affected. Umor Isua-Ikoh of the Peace Point Development Foundation in Nigeria shared the plight of communities at the hands of the anti-deforestation taskforce of the UN Deforestation and Forest Degradation program. In what he called a “new form of colonialism,” the UN program allowed the Nigerian government to collect over five million dollars in fines from apprehended violators, while the community eventually lost its forest. “They became strangers to their own land,” he said, estimating that over 600,000 people lost “their place of worship, watershed, source of traditional livelihood, and water source that they and their ancestors had preserved for over 5,000 years.”

The second session of the African Climate Dialogue, held on Aug. 10, focused on food systems and agriculture, a category that is estimated to contribute 19-29% of total greenhouse gas emissions. Agriculture is also extremely vulnerable to climate change as witnessed in Africa where millions from the Sahel, the Horn and the East of Africa are experiencing acute food insecurity due to unreliable rainfall. Participants shared effective, on-the-ground experiences of agroecology, along with the imperative to include agroecology as a food systems approach in Nationally Determined Contributions at COP 27.

Three more sessions are scheduled to be held before the end of September.

One of the most hopeful aspects of the African Climate Dialogues is the space for young voices. As Francisca Ziniel of the Catholic Youth Network for Environmental Sustainability in Africa (CYNESA) said, “ensuring that a majority of them are there and have a say when decisions about their future are made is imperative to changing the tide and inducing the much-needed change. Young people have the numbers, the capacity, and the solutions to address the global challenges confronting the world.”

Faith in action: Follow the African Climate Dialogues at https://bit.ly/AfricanClimateDialogues