U.S. Caravan for Peace and Justice 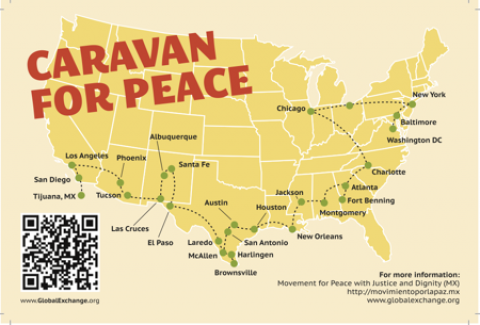 Join the U.S. Caravan for Peace and Justice!

From the Americas Program at Center for International Policy:

Mexico’s Movement for Peace with Justice and Dignity set off from San Diego on August 12 to traverse the country with a message: To end the war on drugs in the U.S. and Mexico.

“Led by the poet Javier Sicilia, the caravan will meet with members of U.S. society through dialogue and peaceful action, carrying proposals to shut off the flow of illegal arms to Mexico, supporting humane and health-oriented alternatives to the prohibition of drugs and demanding effective, non-violent security policies. It will also seek a humane immigration policy."

A handful of U.S. companies that produce weapons and defense and intelligence equipment are raking in taxpayer dollars in government contracts for the drug war, while in Mexico more than 70,000 people have died since the war was launched in December 2006.

Today the face of the U.S. government in Mexico is the face of war. This face is reflected in the vast expansion of joint security operations and direct intervention in Mexico´s counter-narcotics planning and operations. Instead of schools and hospitals, our tax dollars support military helicopters and espionage systems.

The relationship between the two nations has degenerated into a seemingly endless war on drugs. The war is commanded from the north, where enforcing prohibition is considered more important than human lives, and fought in the south, where the long arm of enforcement has left 70,000 dead in the past six years.

Despite tragically negative results, the U.S. government has dismissed calls from citizens in both countries to end the war on drugs and the misguided Merida Initiative that supports it. Instead, we continue on a path that throws U.S. youth behind the bars of lucrative private prisons and feeds defense companies by perpetuating violent conflict in Mexico.

Family members of the thousands murdered, disappeared, attacked and displaced in Mexico’s drug war and their supporters will present a very different, human, face of binational relations. They will meet with families in the United States that have suffered senseless incarceration and violence as a result of criminalizing drugs, rather than supporting communities and individuals to manage the health and social threats posed by consumption and addiction.

Find out what organizations are planning in your community. You are needed to help out with organization of events and logistics for the peace caravan. Please plan to attend the events. Learn first-hand the human costs of the drug war and find out how to make change from your own community on up to the national and international levels.

Here is the caravan schedule: