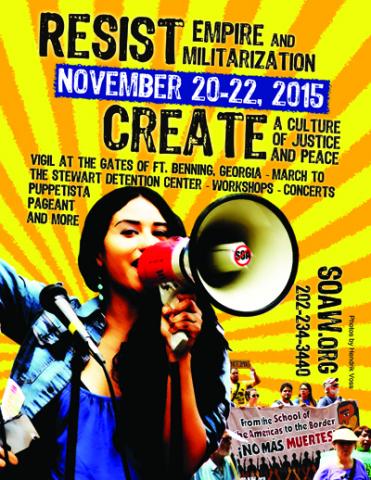 This November 20-22, 2015, SOA Watch will return to the gates of Fort Benning to take a stand for justice and accountability. Torture survivors, union workers, religious communities, musicians, puppetistas, students, migrants, veterans and others from across the country will speak out against violence and militarization. Participants will commemorate the martyrs, march to Stewart Detention Center, teach and learn from each other in the Columbus Convention Center, and celebrate resistance at the gates of Fort Benning, Georgia. The military base, one of the largest in the world, is named for the Georgia politician and Confederate general Henry L. Benning, who helped Georgia secede, and who was an outspoken proponent of slavery. Fort Benning is also home to the notorious School of the Americas (SOA/ WHINSEC) and has become a focal point of the people power resistance to empire and militarization.

Powerful speakers and musicians from across the Americas will perform, the puppetistas will pull off a massive theater pageant in the streets, followed by a solemn funeral procession to remember all those who have been murdered in the struggle. Mass mobilizations are a key element for the success of social justice movements.