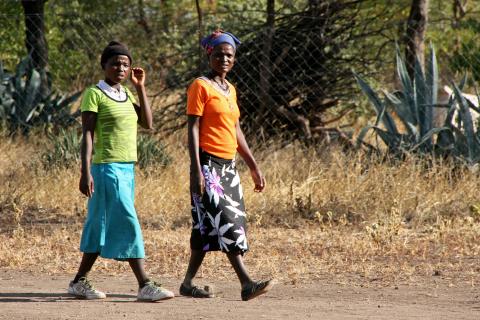 Dr. David Kaulem, Dean of the School of Education and Leadership at Arrupe Jesuit University in Harare, Zimbabwe, offers Pope Francis’ concept of political charity described in Fratelli Tutti as a way to break the cycle of polarization and economic despair. This article was published in the January-February 2021 issue of NewsNotes.

As we approach the New Year, the situation in Zimbabwe is characterized by ‘a lot of effort but no work done.’ Many things happen but things do not really change for the better, especially for the majority of Zimbabweans.

The ruling Zanu PF party continues to rule and the opposition continues to be manipulated, to split itself up and to demonstrate signs of fatigue and ineptitude. Civil society has been professionalized and relies on a few international donors who also seem tired. Most foreign diplomatic missions seem to have decided that development which relies on NGOs does not work and so are pushing for their businesses to bring hope to countries like Zimbabwe.

In the meantime, the majority of citizens suffer from poverty, unemployment, and the impacts of climate change and the COVID-19 pandemic. They live daily with unbearable economic pressures.
The Zimbabwe Catholic Bishops issued a message of hope for the 2020 Advent season. They call on political leaders to practice “political charity” in order to cultivate national unity. The bishops are following Pope Francis’ message in Fratelli Tutti to cultivate friendship, fraternity, and love. This is an important message for Zimbabwe today, where political polarization has made genuine debate about development “degenerate into a permanent state of disagreement and confrontation” (FT 15).

The opposition Movement for Democratic Change (MDC) Alliance is still contesting the results of the 2018 elections. The ruling party, unperturbed, is already preparing for the next elections in 2023 when the same story will be repeated.

There is no genuine conversation between the two major political movements. Each has called for national dialogue, but only on its own terms. Factional politics continues to distract both parties. As Pope Francis writes, “Political life no longer has to do with healthy debates about long-term plans to improve people’s lives and to advance the common good” (FT 15).

Unfortunately, most reporting about Zimbabwe encourages divisions and highlights failures, most of which are real. We are all lost in the details of the atrocities by the ruling party, the persecution of the opposition, and sometimes the weakness of the opposition.

The ‘new dispensation’ led by President Emerson Munangagwa is still Zanu PF led. But it is a somewhat different Zanu PF party. Yes, it is more militarized and many of its members are still obsessed with maintaining power, acquiring wealth and destroying the opposition. But its grip on power is less decisive, hence it moves gingerly towards reforms. These are great opportunities for democracy and the building of a developmental state that is separate from the ruling party and works more for the common good.

The Zanu PF-led government will be changed more by participating in the state structures and procedures it is creating than by fighting them. The Zimbabwean army and police have established higher education institutions. Academics, civil society, and other professionals must support and participate in the training and education of our security personnel. Reforms are taking place in national development strategies, independent constitutional commissions and the opening up of space for private radio and televisions stations. New professionalized boards of state-owned enterprises are being established and the devolution process has been initiated to have regions make more decisions about their own development.

The Zanu PF party wants to control these processes, and indeed they are doing so, but Zimbabweans, acting on “political charity” can push them beyond the limited vision and political sensibilities of Zanu PF.

All this requires truly national leaders from all sectors of society to come forward and participate in the building of the state as a common good. For the Church, it means going beyond the issuing of pastoral statements and contributing to the widening of the national social imaginary. It means contributing to the retelling of the Zimbabwean story to make it more inclusive and more humane.

This means honestly confronting the undemocratic, sexist, patriarchal and abusive legacies in which we have all participated. As we struggle to end some of the negative aspects of our politics, it is important to recognise that many of us have been complicit and that the struggle is not always out there, but it is in our minds, our hearts, in our hands and feet and in the social and cultural structures. This is not time to demonize each other but to practice political charity as we confront our national demons.

Photo: Two women in Zimbabwe by Urlika, available on Flickr.