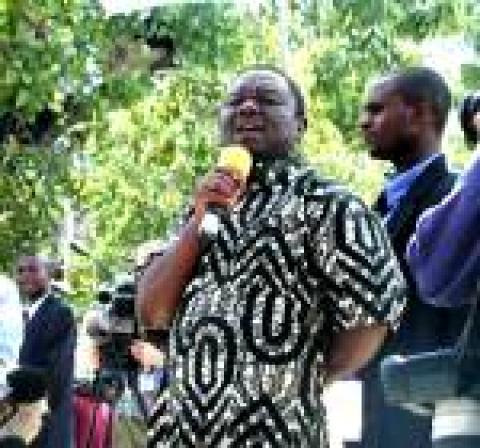 Though the date has not yet been announced, Zimbabwean voters are expected to go to the polls for parliamentary and presidential elections before August 29. As election time draws near, memories of the violence that accompanied the 2008 elections and its aftermath, as well as a languishing process to enact the constitution supported by 95 percent of the voters in March of this year, have Zimbabweans preparing for the worst.

Five years ago, in 2008, after two runoff elections plagued by political intimidation and violence, presidential challenger Morgan Tsvangirai of the Movement for Democratic Change party (MDC) pulled out of the race. However, he did sign the Global Political Agreement (GPA), established in 2009. Under the GPA, a power-sharing government was formed where Robert Mugabe of the Zimbabwe African National Union - Patriotic Front (ZANU-PF) party remained president and Tsvangirai became prime minister. Their task was to implement political reforms and to improve the human rights and living conditions for Zimbabwean citizens.

In a GPA referendum in March 2013, Zimbabweans voted overwhelmingly in favor of a new draft constitution. One of the most popular aspects of the new constitution sets a limit of two five-year terms for the president. (Mugabe has now served as president since 1987.) The Aljazeera news service quoted schoolteacher Petronella Dzikiti, who said as she cast her ballot, "We don’t want a situation like we have today, where some of us knew one leader as a child who remains there when we are grown-ups."

The draft constitution also reduces the president’s power; it prevents presidential veto of legislation passed by Parliament and requires two-third parliamentary support to declare public emergencies. It also establishes a peace and reconciliation commission, an independent prosecuting authority and an anti-corruption commission. Once enacted, the new constitution is set to offer greater protection against malicious arrests and prosecution; it will introduce new courses of redress for victims of violence and intimidation and pave the way for the establishment of a functioning human rights commission.

In mid-April Zimbabwe celebrated its 33rd year of independence. As President Mugabe’s ZANU-PF party boasts of its central role in winning this hard-fought liberation, its messages are questioned by a younger generation that knows little of the struggle but sees that a majority of people suffer under economic stagnation that has only worsened since the replacement of foreign currency for the Zimbabwean dollar in 2009.

The delegation observed a clampdown on civic organizations engaged in voter registration and mobilization campaigns. They found that ZimRights and other youth-focused organizations have been continuously raided, have had their meetings disrupted, and their leaders arrested on bogus grounds, often on the pretext of "fabricating voter registration documents" and for conducting "activities that threaten national security."

Delegation members also expressed concern that because the reforms intended in the GPA agreement have not been implemented, the president continues to command an unchecked monopoly on the military and security forces. A pattern of intimidation, violence, and detention against ordinary employees of civil society organizations and human rights leaders continues, which presents a serious obstacle to the electoral process. The RFK Center reports that since August 2012 more than 20 civil society organizations have been targeted by the Zimbabwe Republic Police (ZRP).

The European Union recently eased sanctions against Zimbabwe, believing that the August election is on course. For the majority of Zimbabweans, the sanctions are not crucial to their income and well-being; human rights observers argue that sanctions, which primarily affect only the extremely small minority of wealthy Zimbabweans, should be maintained until an election date is set and the reforms outlined by the new constitution are put in place.

In March, the Zimbabwe Catholic Bishops’ Conference issued a pastoral letter, "Zimbabwe elections 2013 and the God of second chances." While they acknowledge the gains of the past, having "closed the door to colonialism and opened another to independence" in 1980, the bishops caution that Zimbabwe cannot rest on the successes of the past: "The patriotic fervor, national pride and the once lofty and romantic ideals of independence seemed to be lost, at least in the considered view of many of our nationals, in the stark reality of a nation divided, traumatized and impoverished by this political, economic and social crisis."

Read the entire text of the bishops’ statement here.