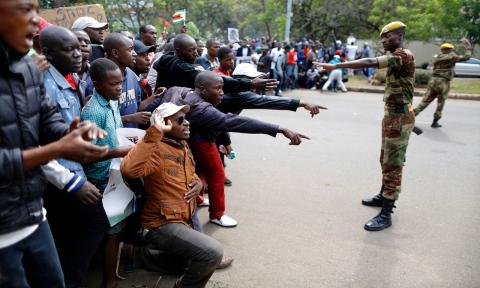 As Zimbabwe prepares for the first elections since a military coup led to the resignation of 37-year ruler Robert Mugabe in November, U.S. leaders are offering incentives if the country can conduct a free and fair vote. The following article was published in the May-June 2018 issue of NewsNotes.

U.S. Senators Christopher Coons and Jeff Flake led a five-person delegation from the Senate Foreign Relations Committee on a fact-finding mission in March to meet with new President and formerly ousted vice President Emmerson Mnangagwa, who is serving out former president Robert Mugabe’s five year term until elections can be held later this year.

“The president has made a commitment to take action, but some of the important actions required for progress towards the conditions for free and fair and credible elections have not yet happened,” Coons told the media after the trip, as reported in Zimbabwean media.

Coons and Flake proffered an amendment to the U.S.-Zimbabwe Democratic and Economic Recovery Act, which stipulates actions Zimbabwe’s new government must take to ensure free and fair elections in order for sanctions to be lifted.

Robert Mugabe and his party had ruled Zimbabwe ever since the former colony known then as Rhodesia wrested independence from the United Kingdom in 1980. Massive mismanagement and corruption, political repression, rampant inflation, and international isolation had created a festering political crisis in the country, while the 93-year-old leader’s health and welfare spurred a struggle over succession within the ruling party, the Zimbabwe African National Union-Patriotic Front, or ZANU-PF.

The situation came to a head in November when Mugabe suddenly fired his vice president, Emmerson Mnangagwa, who was in direct competition with his wife Grace to succeed Mugabe in power. Two weeks later, on November 14, Mnangagwa loyalists in the military led a bloodless palace coup, placing Mugabe on house arrest until he resigned under threat of impeachment on November 21. The ZANU-PF named Mnangagwa president of the party and of the republic on Nov. 24.

Maryknoll Sister Janice McLaughlin, who has lived and worked in Zimbabwe for more than thirty years, witnessed the dramatic events and says she has hope for a new Zimbabwe.

“It was all very positive and upbeat,” she said of the new president’s recent meeting with U.S. officials.

“There is certainly more openness to international involvement and a much freer atmosphere for campaigning,” she wrote in a recent email to the Maryknoll Office for Global Concerns. “The opposition is still hopelessly split although many still have reservations about the ‘new dispensation.’ We will keep our eyes open,” she said.

Concerns over the ruling party’s capacity to hold free, fair and credible elections are well founded. While certainly not a repeat of the bloody 2008 elections, the last harmonized elections in 2013 were not considered credible by citizens of Zimbabwe or international observers. Irregularities included police and military presence at polling places, intimidation against candidates, restrictions to access to the polls, and ballot tampering.

Sister McLaughlin says mechanisms are now in place that could set a more democratic course for this year’s vote.

“The Zimbabwe Human Rights Commission that was mandated by the 2013 Constitution … will monitor the harmonized elections in three phases,” Sr. McLaughlin said. “The phases include the pre-election environment, such as political party rallies and primary elections; public education of human rights that will emphasize tolerance of divergent views during election season; curbing political violence through engagements with all political parties; monitoring the media against hate speech likely to stir rage, anger and violence; and promoting peace before, during and after the elections.”

The campaigning has already begun.

“The ZHRC [ruling party] has been using radio and leaflets in local languages to promote observance of human rights,” she said. “It also has a referral mechanism to assist victims of political violence.” To facilitate the process, Sr. McLaughlin is helping to organize a forum for public dialogue on the elections to include “speakers with different points of view.”

After the visit by the five U.S. Senators, President Mnangagwa assured observers that, quite unlike Mugabe, a range of views will be accepted in a new, post-Mugabe, Zimbabwe. “Where there is dialogue, there is always a way of resolving challenges and this one is an opportunity for us to look at issues and together resolve them and move forward,” Mnangagwa said. “That is the spirit which our people must accept.”