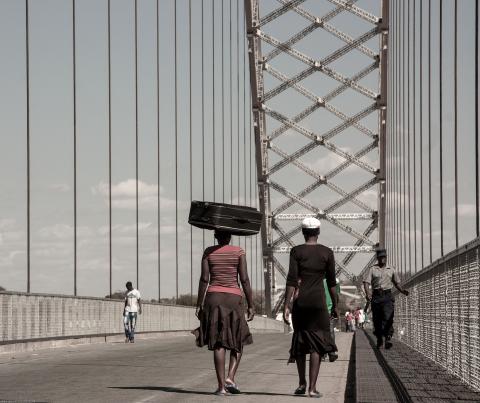 Zimbabwe is experiencing significant challenges politically, economically and environmentally. Sister Janice McLaughlin, M.M., writes from the capital city of Harare about new patterns in human trafficking recruitment that have emerged amid these great pressures. The following article appeared in the September-October 2019 issue of NewsNotes.

Public advertisements for lucrative work and inexpensive education abroad are luring Zimbabweans into the trap of human trafficking. Although there is growing awareness of these scams within Zimbabwe and internationally, more effort is needed to combat this danger to people who are dreaming of opportunities to build better futures abroad.

Poverty and unemployment are drivers of trafficking, drawing unsuspecting individuals into the net of unscrupulous organizations that take advantage of their plight. Zimbabwean newspapers carry advertisements for education overseas in countries as far afield as India, Russia, China, Poland, Canada and Malaysia. The ads generally promise full or partial scholarships for these studies. An unsuspecting reader might jump at the opportunity to get a free education overseas only to learn through a dangerous and traumatic experience that some of these offers are not genuine. In 2018, a Zimbabwean newspaper reported a scam that left young men and women stranded in China, owing hundreds of dollars when they thought that all expenses had been paid.

Phony scholarships are one scam that has fooled some trusting Zimbabweans, and another is phony job offers in far-away places such as Kuwait and Saudi Arabia that turn out to be a ploy to get cheap domestic servants who are virtual slaves. In 2016, about one hundred Zimbabwean women escaped from domestic slavery in Kuwait and sought safety in the Embassy of Zimbabwe in that country. These women had come to the country thinking they were answering advertisements for well-paying, comfortable jobs. Media attention eventually led to their repatriation through the assistance of the International Organization for Migration and the Zimbabwean Government.

Here in Zimbabwe, some of the women who escaped from domestic slavery in Kuwait and Saudi Arabia have become powerful witnesses to the reality of this criminal racket.  They tell their stories at awareness-raising workshops organized by the African Forum for Catholic Social Teaching (AFCAST) at schools and churches in the Harare Archdiocese.

Trafficking of Zimbabweans also occurs within the continent, and particularly in South Africa. Youth and even children are taken to South Africa to become cheap labor or to be used in the sex industry. Because it is illegal, it is hard to get actual statistics to expose the extent of the problem.

The trafficking of human persons is a multi-billion-dollar industry that turns the human person into a commodity to be bought and sold. The International Labor Organization estimates that 40.3 million people have been trafficked globally, 80 percent of whom are female and half are children.

The international community has recognized this  global epidemic and has passed laws to deal with it, such as the Palermo Protocols that were passed in 2000 at the United Nations to improve international coordination to combat human trafficking and assist victims.  Most countries, including Zimbabwe, are signatories to these protocols and in addition have their own laws and regulations. Despite these regulations, traffickers are rarely apprehended and prosecuted enough.

The Government of Zimbabwe has developed a National Plan of Action (NAPLAC – 2016-2018) that is guided by concrete principles to stop trafficking and to support the survivors of this vile practice.  Not many Zimbabweans are aware of this initiative and do not know how they can be involved in taking action against trafficking.

Pope Francis has made the campaign against trafficking one of the pillars of his papacy. He makes this issue the topic of many of his talks and sermons and has played an outstanding role in raising awareness to this practice that he has rightly called “modern day slavery.”