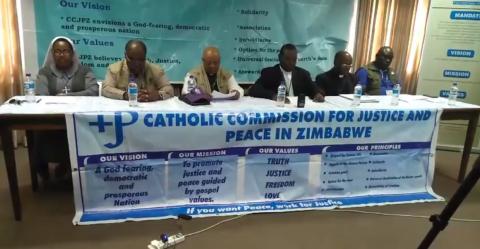 The Catholic Commission for Justice and Peace (CCJP) offers its analysis of the elections held in Zimbabwe on July 30, 2018.

The Catholic Commission for Justice and Peace in Zimbabwe (CCJPZ)  released a report on the 2018 Zimbabwe Harmonized Elections. The eight-page executive summary of the report is available here. The full report will be made available on the Zimbabwe Catholic Bishops' Conference website in the near future.

From the executive summary:

The executive summary includes a list of improvements that have been made since the 2013 elections, namely, a minimal use of violence and oppressive legislation, as well as a long list of the failings and suggestions for what needs to be done.

Photo: Screen shot from video of Zimbabwe Catholic Bishops Conference (ZCBC) press conference on pre-election environment, voting processes and how Zimbabweans should behave during the electoral period, July 27,2018. available on the Facebook page of the Catholic Commission for Justice and Peace in Zimbabwe