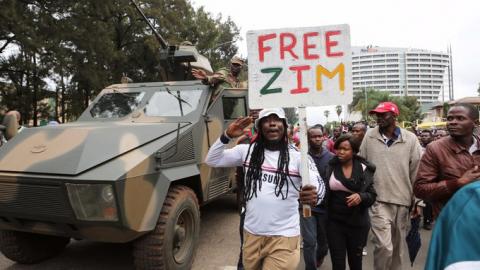 The Catholic Bishops of Zimbabwe issued a strongly worded pastoral letter in defense of human dignity and fundamental human rights as the government clamps down on dissent. The following article was published in the September-October 2020 issue of NewsNotes.

Christian leaders are speaking out in support of the Zimbabwe Catholic Bishops’ Conference after the country’s leaders launched a vitriolic attack on Archbishop Robert Ndlovu of Harare and his fellow bishops, calling the Church’s leadership “misguided and evil-minded” in their recent condemnation of the government’s heavy-handed response to dissent.

The Bishops’ Conference issued a pastoral letter on August 15 that criticizes the country’s harsh treatment of voices of dissent. Many activists, political opponents and journalists are being held in prison after public protests were squashed by the government on July 31.

Zimbabweans, including leaders of the Baptist and Pentecostal churches, responded to the arrests by sharing the hashtag #ZimbabweanLivesMatter on social media. The Catholic bishops’ pastoral letter also condemns corruption, widespread human rights abuses, and the government’s handling of an economy in free fall.

Entitled “The March is not ended” in honor of the late U.S. Congressman John Lewis, the letter begins with a recognition of Lewis’ lifelong commitment to defending civil rights. “This is our challenge in Zimbabwe today,” the letter says, “between those who believe in the past and completed liberation and those who realize that the march is not ended. Peacebuilding and nation building are never completed tasks. Every generation has to establish national cohesion and peace.”

“Fear runs down the spines of many of our people today,” the letter states. “The crackdown on dissent is unprecedented ... Our government automatically labels anyone thinking differently as an enemy of the country: That is an abuse.”

“It is not clear to us as your Bishops that the national leadership we have has the knowledge, social skills, emotional stability and social orientation to handle the issues that we face as a nation,” the letter goes on. “All we hear from them is blame of our woes on foreigners, colonialism, white settlers, and the so-called internal detractors. When are we going to take responsibility? While our neighbors in the region are strengthening their democratic institutions, we seem to be weakening ours.”

The Information Minister Monica Mutsvangwa responded immediately by calling the president of the Catholic bishops conference, Archbishop Ndlovu, “evil-minded,” and seeking to lead the nation into the “darkest dungeons of Rwanda-type genocide” in pursuit of a Western agenda of regime change.

Leaders of the largest Protestant denominations and Evangelical groups, as well as the Catholic Church in Zimbabwe, collectively called for a “seven-year political sabbath” to address political polarization and economic decline starting in October 2019. Since then, inflation has only worsened, some say to over 800 percent, and an ongoing medical doctor’s strike and chronic unemployment have left many people with no medical care, no jobs, and no hope for the future.

With 86 percent of Zimbabwe’s 14 million people identifying as Christian, the governments aggressive response to the Catholic bishops’ pastoral letter shocked many.

The Conference of Major Religious Superiors of Zimbabwe, of which Maryknoll Sisters are an active member, issued a message of solidarity with the Catholic bishops for their pastoral letter. “We note with concern the government’s aggressive response to the pastoral letter by singling out one of the bishops while ignoring the issues that were raised in the pastoral letter. Our government ought to work toward finding lasting solutions to the crisis in Zimbabwe today.”

The Evangelical Fellowship of Zimbabwe also took a public stand in support of the Catholic bishops’ pastoral letter. “We stand with the truth that the Catholic Bishops so ably articulated,” said Bishop Never Muparutsa, Presiding Bishop of the Pentecostal Assembly of Zimbabwe, describing the situation as a “multi-layered crisis of … economic collapse, deepening poverty, food insecurity, corruption, and human rights abuses.”

Zimbabwe’s justice minister, Ziyambi Ziyambi said the statement was an “insult” to President Mnangagwa and that the Foreign Minister Sibusiso Moyo was scheduled to meet with the representative of the Holy See in Harare to “ascertain whether or not such statements reflect the official attitude of the Holy See towards Zimbabwe’s leadership.”

Photo: 2018, March in Zimbabwe. Photo available in the public domain.