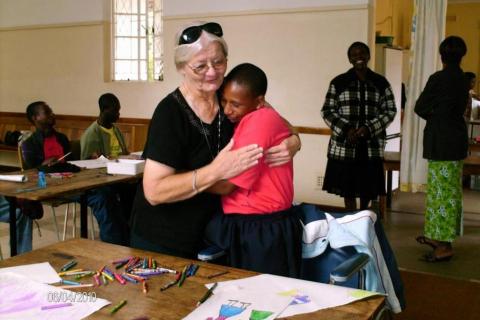 In advance of the general election in 2018, the Zimbabwe Catholic bishops issued a pastoral letter calling on the government and citizens to respect the Constitution and reject the use of violence and coercion. The following article was published in the July-August 2017 issue of NewsNotes.

The Catholic bishops in Zimbabwe issued a pastoral letter on June 4 in an attempt to prepare the people for the general election in 2018. In their letter entitled “Elections, Peace and Development,” the bishops say they hope to avoid a repeat of the violence that occurred before and after the election in 2008.

Speaking directly to the government, political parties, and the people of Zimbabwe, the bishops list in clear, straightforward language seven points they wish to reflect on, the first of which is “Accept one another.”

“We appeal first for acceptance of one another and respect for different opinions,” the letter says. “We all know that this election will, like others, be contested by people different from us and holding different views. This is not a threat to democracy and peace but rather the very life blood of it.”

The bishops go on to list the importance of choosing words that build unity rather than division and adhering to and respecting the Constitution of Zimbabwe, which was approved by a referendum vote of May 2013. They call on people to become engaged in the political process, to vote, and choose leaders who “show by their actions, rather than just their words, that they are really working for the benefit of all!”

The bishops appeal to the government of President Robert Mugabe to ensure the people’s rights and freedoms as outlined in the Constitution and call for people to pray for present and future leaders “that they may find the courage and the wisdom to put the people’s interests above their own.”

In their seventh and final point, written in bold and italics, the bishops say, “We reiterate: Reject all forms of violence and coercion.”

“Violence and coercion only serve to discredit our elections,” the bishops explain. “Any use of force takes away the credibility and integrity of the elections. People must be able to make free choices according to their own judgement.”

All the Catholic bishops of Zimbabwe signed the pastoral letter which was released on Pentecost Sunday.

Campaigning by presidential candidates has already begun. President Mugabe is organizing nationwide public rallies aimed at increasing support for the ruling ZANU-PF party. Other parties are putting up presidential candidates and individuals are courageously throwing their hats into the ring. One is Nkosana Moyo, who heads the Mandela Institute for Development Studies in Johannesburg. Moyo was the Minister of Industry and International Trade in Zimbabwe for a short time in 2001 but resigned and moved to South Africa only 11 months later, reportedly due to his frustration over the government’s disregard of the rule of law and attacks on farms and businesses by ZANU-PF activists.

In an open letter to President Mugabe in 2016, Moyo asked, “How can it be that when Zimbabwean citizens have cause to disagree with their government they are labeled as ‘not part of us’ at a national level?” He went on to say:

“There is no amount of outside intervention, support, or assistance that will make Zimbabwe prosper unless Zimbabweans are united internally. I would like to persuade you to take to heart the suffering of the citizens rather than push back at them as if their pleas are not founded on the reality of a dying economy.” ... “To harness the energy, imagination, and innovativeness of the nation, we have to have a better tolerance and capacity for challenge, pushback, and inclusiveness. We have to cultivate the capacity for synthesizing other people’s views into our own to get synergistic multipliers in the national developmental effort.”

Though few expect him to get very far, Moyo may be able to raise some important issues for national discussion, namely corruption, lack of cash flow and financial collapse, and the subsequent decline in the educational system throughout the country.

Meanwhile, Zimbabwean pastor Evan Mawarire, the founder of the #ThisFlag political protest movement, has reportedly been arrested again, this time while praying with medical students at the University of Zimbabwe during their public protest over rising academic fees on June 26. Mawarire inadvertently launched a movement in 2016, after posting a 4-minute video of himself on social media, draped in the national flag and lamenting the political corruption and economic crisis in Zimbabwe. Mawarire pointingly blamed the government of Robert Mugabe for bringing the flag into disrepute.

The video struck a chord with people throughout the country who struggle to find work and afford food and other basic necessities. Thousands of people took to the streets and even attended graduations and worked in the street markets while draped in the flag of Zimbabwe as a sign of protest.

General elections are scheduled to be held in Zimbabwe on or before July 31, 2018.