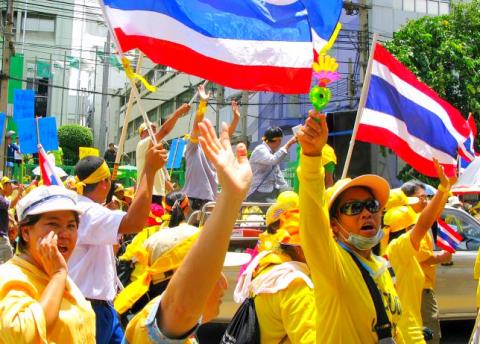 A new youth protest movement calling for greater democratic norms has emerged in Thailand. The following article was published in the September-October 2020 issue of NewsNotes.

In late July, youth in Thailand began taking to the streets in protest of their government, issuing a variety of complaints and demands. Among their grievances are the military’s close involvement with the government; the lack of democratic norms and human rights protections in the country, especially for dissidents; and the economic crisis brought on by the pandemic.

This new protest movement has grown and evolved from high school and university student protests earlier this year. The initial protests were in response to what students described as a militaristic culture in Thai schools, which encouraged subservience to the government and monarchy and denied free speech to students.

As the movement has grown, and as it has been revived in recent weeks, it has taken on a wider set of issues, including calls for a new constitution, written by a democratically elected body, and economic support for those facing the worst of the growing economic crisis.

Some protesters have broken norms by criticizing the monarchy, represented by King Vajiralongkorn, who took the throne in 2016. They claim the palace has centralized power in the last few years and strengthened its relationship with the military, including through transferring two army units to the king’s personal control last year. In addition, they claim that the monarchy has been lavishly spending while Thai citizens are struggling to feed themselves in this recession.

Those defending the monarchy say that its close relationship with the military and its centrality to Thai culture provides a sense of unity for the Thai people. Criticism of the monarchy is punishable by up to 15 years in prison by law, and dissidents have disappeared in the past following complaints against the monarchy.

The main faction of the youth movement focuses on three central demands: discarding the military-drafted constitution, ensuring the safety and rights of dissidents, and dissolving part of the current Parliament. “Our main ideology is democracy,” Jutatip Sirikhan, 21, president of the Student Union of Thailand, which has helped organize the protests, told Reuters.

Most recent reports have highlighted the government’s efforts to silence this new protest movement through frequent arrests of its leaders. Despite this, youth protests continue daily.