A world without nuclear weapons IS possible 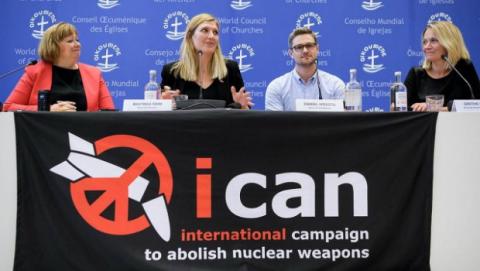 Under pressure from nuclear-armed nations that insist a world without nuclear weapons is not possible, a grassroots movement has achieved a UN nuclear ban treaty and Nobel Peace Prize. The following article was published in the November-December 2017 issue of NewsNotes.

On July 7, a nuclear ban treaty was adopted by two-thirds, or 122 of the 193 UN member states, after months of negotiations. The negotiation process is noteworthy in both who joined (a majority of the countries in the world and the Vatican), and who did not (all nine of the nuclear-armed nations).

The nuclear powers – United States, Russia, United Kingdom, France, China, India, Pakistan, Israel, North Korea – boycotted the negotiations, erroneously citing the need to uphold the Treaty on the Non Proliferation of Nuclear Weapons (NPT), even though Article VI of that treaty requires all parties to “pursue negotiations in good faith” for nuclear disarmament.

Behind this Herculean effort was the International Campaign to Abolish Nuclear Weapons (ICAN), a small non-governmental organization based in Geneva. ICAN coordinated with hundreds of NGOs in more than 100 countries, including Pax Christi International, to guide a global discussion and build international support for the ban.

“By harnessing the power of the people,” ICAN said in a statement celebrating the adoption of the treaty, “we have worked to bring an end to the most destructive weapon ever created – the only weapon that poses an existential threat to humanity.”

ICAN has broken the deadlock surrounding nuclear weapons by reframing the issue as a humanitarian concern rather than a national security one. The Nobel Committee recognized the importance and success of this grassroots effort and awarded ICAN the Nobel Peace Prize for 2017.

ICAN sees the prize as a tribute to “the tireless efforts of many millions of campaigners and concerned citizens worldwide who…have loudly protested nuclear weapons, insisting that they can serve no legitimate purpose and must be forever banished from the face of our earth… (as well as) the survivors of the atomic bombings of Hiroshima and Nagasaki – the hibakusha – and victims of nuclear test explosions around the world, whose searing testimonies and unstinting advocacy were instrumental in securing (the nuclear weapon ban treaty).”

The landmark international agreement – officially called the Treaty on the Prohibition of Nuclear Weapons – bans all nuclear weapons as weapons of mass destruction, establishes a pathway to their elimination, and sets obligations to assist victims and remediate the environment harmed by the use or testing of the weapons.

“We are putting nuclear weapons in the same category as other unacceptable weapons,” said ICAN’s executive director, Beatrice Fihn. “Like the conventions prohibiting chemical and biological weapons, landmines and cluster munitions, this treaty bans an entire category of weapons. It strengthens the norm that weapons that cause unacceptable harm for civilians cannot remain legal—and that nuclear weapons are no longer an exception to these norms.”

Just days after the Nobel Committee announced that they had chosen ICAN to receive this year’s Peace Prize, the Maryknoll Office for Global Concerns joined ICAN, Pax Christi International, Amnesty International and other civil society organizations at the 2017 Humanitarian Disarmament Forum at the United Nations in New York to discuss ways to strengthen campaigns to protect civilians from armed violence.

The collective conscious at the forum was simultaneously empowered by ICAN’s recent Nobel recognition and subdued by the rise of authoritarian and nationalist movements, coupled with bellicose rhetoric, around the globe. Nevertheless, speakers repeatedly spoke of a sea change in the narrative around nuclear disarmament, focusing on ending civilian suffering over national security, disarmament on humanitarian terms.

Our focus now turns to working to ensure the nuclear ban treaty’s full implementation. More than 50 countries have signed the treaty but only a few have gone on to ratify it. The treaty will enter into force 90 days after at least 50 countries both sign and ratify it.

The challenge is to bring the nine nuclear-armed nations into the dialogue. This will include working at the legislative level of nuclear power states to build support for the treaty.

Watch and share a two-minute video by ICAN explaining the nuclear ban treaty.
Email your country’s foreign minister to say you want your country to sign the treaty.
Organize an interfaith prayer service for a ban on nuclear weapons. Use this text, written by Pax Christi International for an interfaith prayer service at the Isaiah Wall at the United National in New York City.