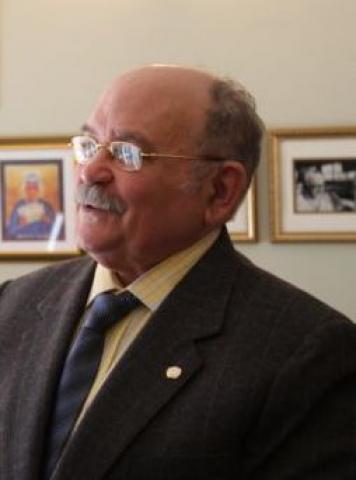 In honor of World Water Day 2021, Flávio José Rocha, a Maryknoll Lay Missioner in Brazil, highlights the role Maryknoll Fr. Miguel d'Escoto played in the passage of the UN resolution naming water as a human right in 2010. World Water Day is on March 22.

Last July, the world celebrated the tenth anniversary of the passage of the United Nations resolution which declared access to water a human right. Many people do not know that a Maryknoll priest, Fr. Miguel d’Escoto, played an essential role in getting that critical resolution passed.

Fr. Miguel d’Escoto, MM (1933-2017), was a Maryknoll priest and diplomat. Towards the end of his illustrious career, he served as President of the United Nations General Assembly from 2008-2009. During his tenure he was able to ensure that the United Nations General Assembly put access to clean water on the agenda. His championing of the issue led to the recognition of access to clean water as a human right which must be provided to citizens by their governments.

In her book, Blue Future, Canadian water activist Maude Barlow explains the importance of having Father d’Escoto in the position of President of the General Assembly for the passage of the resolution. Ms. Barlow was one of d´Escoto’s advisers during his time at the UN and also served as the UN’s first senior advisor on water issues during Father d’Escoto’s tenure as president.

In an important move, d’Escoto gave Barlow and Brazilian theologian Leonardo Boff the opportunity to speak on the 22 of April, 2009, Earth Day, during a UN General Assembly meeting. In the speech, Barlow defended the recognition of water as a human right by all UN member states. Following this, d´Escoto also supported Barlow’s efforts to look for allies within the UN as a strategy for her campaign to make access to water a recognized human right. After working together throughout d’Escoto’s tenure to gather allies among the member states, the resolution was eventually approved in 2010, when the Bolivian Ambassador to the UN presented the resolution to the Assembly.

It may sound obvious to some that water should be considered a human right. However, access to fresh water is hugely contested in many parts of the world, especially when economic interests are at play. Nicknamed “Blue Gold,” in many places fresh water sources are not protected by governments for their citizens, but rather appropriated and polluted by multinational corporations. Given the necessity of water and the money involved, water has become a source of conflicts and wars in many places. It has also been used as a weapon by powerful interests seeking to oppress minorities by denying them their access. The denial of the right to water leads to the denial of many other related rights, such as health, hygiene, food, cooking, leisure, and even spiritual practices.

Pope Francis specifically highlighted the importance of the right to water in his encyclical, Laudato Si’, stating, “Even as the quality of available water is constantly diminishing, in some places there is a growing tendency, despite its scarcity, to privatize this resource, turning it into a commodity subject to the laws of the market. Yet access to safe, drinkable water is a basic and universal human right, since it is essential to human survival and, as such, is a condition for the exercise of other human rights (LS 30).”

The World Health Organization reports that approximately half a million people die of diseases due to unsafe water every year. If we consider the impact of wars caused by water scarcity or which make it harder for people to access water sources, the number of deaths caused by lack of clean water each year is certainly much higher. In many rural areas and in the peripheries of big cities, impoverished people wait for hours in lines to get access to potable water. With the threat of climate change disrupting weather and water cycles, fresh water scarcity is predicted to get much worse.

Today, many advocacy and Church groups use the United Nations resolution naming water as a human right to pressure governments to provide water to poor people and to advocate against privatization of water. In many ways, Father d´Escoto’s efforts were aligned with Pope Francis’ ideas about the interconnectedness of protecting natural resources and the rights of the poor in Laudato Si’ years before it was published. Father d’Escoto left a legacy that helps millions of people around the world to advocate for this most basic right -- the right to water, upon which all life depends.

Flávio José Rocha has been a Maryknoll Lay Missioner since 2003. He lives with his wife, Kathy Bond, and their daughter, Maya, in the city of João Pessoa in northeastern Brazil. One of his ministries is to promote universal access to water.