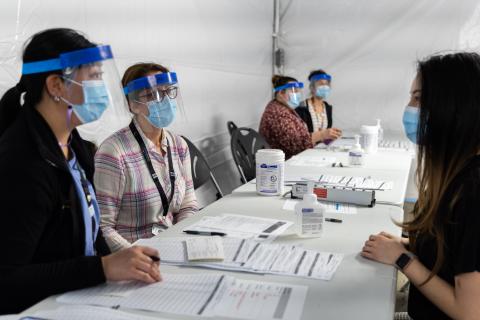 Questions around how COVID-19 vaccines will be distributed, to whom they will become available, and at what cost, pose challenging human rights concerns. This article was published in the January-February 2021 issue of NewsNotes.

The global plan to deliver COVID-19 vaccines to 20 percent of populations in poorer countries in 2021 was reportedly at “very high” risk of failure in early December primarily due to the lack of funding commitments from the United States and China. After intense lobbying by public health and humanitarian experts, Congress included $4 billion for GAVI, the international vaccine alliance co-leading the plan, in the final stimulus package of the year.

Now all eyes look to the Biden administration to keep the momentum going, even as the United States and other wealthy nations have reserved the majority of vaccines available – far more than their population size require, according to a new report by Amnesty International. On Dec. 29, the Vatican issued a statement to “remind world leaders that vaccines must be provided to all fairly and equitably, prioritizing those most in need.”

The majority of low- and middle-income countries will get the vaccine through GAVI’s COVAX Advanced Market Commitment (AMC), a global plan to ensure fair and equitable access to vaccines – which the Trump administration refused to join, partly due to its connection to the WHO. President-elect Joe Biden has not officially committed to joining COVAX but his team has reportedly met with those leading the effort.

On December 18, COVAX announced that they have met their goal to secure 2 billion vaccine doses but they still need $133 million for distributing and storing the doses and $4.6 billion to secure other vaccines when they are approved.

A risk assessment by Citigroup warned the effort might fall short and some countries might not see a vaccine until 2024. How countries distribute the vaccine internally is another question of equity. It will determine who can most fully participate in society, whether that be within a city or at an international meeting such the 2021 UN climate talks.

Intellectual property rights present another barrier to access an affordable, timely and quality vaccine. The WTO’s Trade Related Intellectual Property Rights provisions allow for some flexibilities on patents if they are in the public interest.

The Holy See spoke in favor of a proposal to waive intellectual property barriers at the October WTO meeting. The United States and the E.U. opposed the waiver. After public and private pressure, including from the Maryknoll Office for Global Concerns, the United States remained silent on the issue at a December WTO meeting, signaling a willingness to allow such a waiver in the near future.

Photo: Province of British Columbia efforts to distribute the vaccine, available on Flickr.