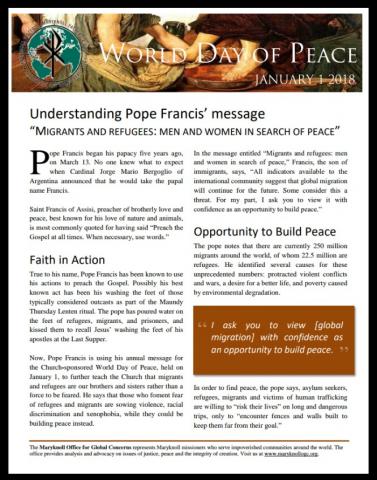 Pope Francis’ message for the World Day Peace on January 1 calls on the world to view global migration not as a threat but as an opportunity to build peace. The following article was published in the January-February 2018 issue of NewsNotes.

Pope Francis began his papacy five years ago, on March 13. No one knew what to expect when Cardinal Jorge Mario Bergoglio of Argentina announced that he would take the papal name Francis. Saint Francis of Assisi, preacher of brotherly love and peace, best known for his love of nature and animals, is most commonly quoted for having said “Preach the Gospel at all times. When necessary, use words.”

True to his name, Pope Francis has been known to use his actions to preach the Gospel. Possibly his best known act has been his washing the feet of those typically considered outcasts as part of the Maundy Thursday Lenten ritual. The pope has poured water on the feet of refugees, migrants, and prisoners, and kissed them to recall Jesus’ washing the feet of his apostles at the Last Supper.

Now, Pope Francis is using his annual message for the Church-sponsored World Day of Peace, held on January 1, to further teach the Church that migrants and refugees are our brothers and sisters rather than a force to be feared. He says that those who foment fear of refugees and migrants are sowing violence, racial discrimination and xenophobia, while they could be building peace instead.

In the message entitled “Migrants and refugees: men and women in search of peace,” Francis, the son of immigrants, says, “All indicators available to the international community suggest that global migration will continue for the future. Some consider this a threat. For my part, I ask you to view it with confidence as an opportunity to build peace.”

The pope notes that there are currently 250 million migrants around the world, of whom 22.5 million are refugees. He identified several causes for these unprecedented numbers: protracted violent conflicts and wars, a desire for a better life, and “poverty caused by environmental degradation.”

In order to find peace, the pope says, asylum seekers, refugees, migrants and victims of human trafficking are willing to “risk their lives” on long and dangerous trips, only to “encounter fences and walls built to keep them far from their goal.”

Pope Francis names four actions, rooted in Scripture, for a strategy to offer refugees and migrants an opportunity to find the peace they seek.

First, welcome them by expanding legal paths for safe migration and ending deportation back to countries where they would face persecution and violence. Pope Francis says Scripture reminds us: “Do not forget to show hospitality to strangers, for by so doing some people have shown hospitality to angels without knowing it.” (Hebrews 13:2)

Second, protect the dignity of vulnerable populations, in particular women and children, from danger and exploitation. Pope Francis quotes the psalm, “The Lord watches over the foreigner and sustains the orphan and the widow” to demonstrate that “God does not discriminate.” (Psalm 149:9)

Third, promote integral human development of migrants and refugees by ensuring their access to education to “better equip them to encounter others and to foster a spirit of dialogue rather than rejection or confrontation.” The pope says God “loves the foreigner residing among you, giving them food and clothing. And you are to love those who are foreigners, for you yourselves were foreigners in Egypt.” (Deuteronomy 10:18-19)

Fourth, integrate them in the daily life of the society that welcomes them, as part of “a process of mutual enrichment and fruitful cooperation.” The pope quotes the apostle Paul: “You are no longer foreigners and strangers, but fellow citizens with God’s people.”(Ephesians 2:19)

Pope Francis also names two pending agreements, known as Global Compacts, one for safe, orderly migration and the other for refugees, that the United Nations is scheduled to draft and approve in 2018 as the structure in which nations can respond to this crisis. He says the compacts need to be “inspired by compassion, foresight and courage” so as to advance peace. “Only in this way can the realism required of international politics avoid surrendering to cynicism and to the globalization of indifference.”§