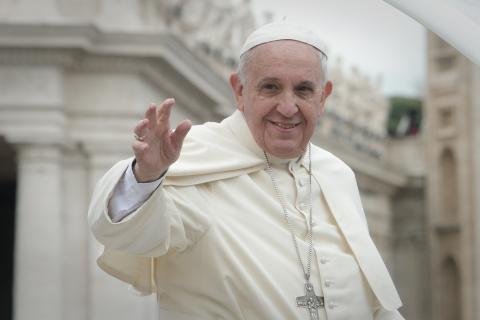 On January 1, Pope Francis issued the 54th annual World Day of Peace message, “A Culture of Care as a Path to Peace.” This article was published in the January-February 2021 issue of NewsNotes.

In the 2021 World Day of Peace message, Pope Francis returns to the theme of fraternity, the focus of his first World Day of Peace message in 2014 and of his most recent encyclical, Fratelli Tutti. Like the encyclical, the 2021 message lifts up the integral whole of Catholic social teaching as an expression of Christian care for all people, particularly in the light and wake of the COVID-19 pandemic. In presenting fraternal care as a path to peace, the pope highlights the connection between social injustice and violent conflict, and the critical role of women at all levels of peacebuilding.

Francis calls on leaders in all sectors – the state, business, science and academics, international organizations, and media – to adopt the principles of Catholic social teaching: the dignity and rights of each person, the common good, solidarity, and the protection of creation, explaining that these can act “as a ‘compass,’ capable of pointing out a common direction, and ensuring ‘a more humane future.’” Significantly, he asserts that “[this] can only come about through a widespread and meaningful involvement on the part of women, in the family and in every social, political and institutional sphere.”

The pope draws a direct connection between violent conflict and humanitarian crises such as mass migration, economic collapse, lack of access to education, and famine. For the third time in recent months, Francis repeats Pope Paul VI’s call for a global fund in which a portion of each country’s military budget would be set aside for economic development and – most urgently during the global food crisis caused by the pandemic – to fight hunger.

Francis’ vision of care stems directly from the belief that all people are children of God, and therefore sisters and brothers to one another. Where there is violence, the pope calls on peacemakers to promote healing and renewed encounter. Harmony among all people and with creation is the only path forward: “Peace and violence cannot dwell together.”