What is Happening at the Border 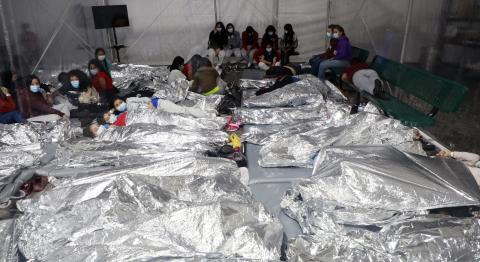 Maryknoll lay missioner Heidi Cerneka, an immigration attorney in El Paso, Texas, shared with us her perspective on the root causes of the current situation at the border and the most critical next steps for protecting the rights of migrants and asylum seekers.

Click here to take action to end Title 42 expulsions of asylum seekers at the border.

Since the beginning of March, news reports about increases in the number of migrants and unaccompanied children at the U.S.-Mexico border have raised concerns about a new “surge” in migration, a “new border crisis.” But immigrant advocates and analysts working along the border offer a different narrative.

Heidi Cerneka, a Maryknoll lay missioner working as an immigration attorney in El Paso, Texas, said, “It is outrageous that some are placing the blame for the current increase in asylum seekers arriving at the border on the shoulders of the Biden administration. There has been a four-year abyss of injustice, indignity and lack of recognition of any right to asylum — a right guaranteed by both U.S. law and by our commitment to international law.”

Cerneka explained that the situation at the border is the predictable result of decades of broken immigration and asylum policies, an enormous backlog of asylum cases due to Trump administration policies and intensifying “push” factors from Central America and Mexico, including desperate poverty, climate change and agriculture disruption, gang violence and COVID-19.

“We need far better asylum and immigration policies than we have had, even before the Trump administration,” Cerneka said, “but due to the policies of the past four years, we are so much further behind now than we were before. The current administration is not only starting from zero but actually having to undo so many unjust actions that continue — and all the human damage caused by recent policies.”

In February Cerneka was glad to see an end to the Migrant Protection Protocols (MPP), also known as the “Remain in Mexico policy.” Implemented by President Trump, it forced asylum seekers to remain in Mexico while their cases were being processed in the United States. Cerneka said, “That illegal and cruel policy had nothing to do with asylum and justice, and everything to do with keeping people out no matter what. It was not good for the border communities in Mexico and not good for our relations with Mexico. It was an affront to human dignity, human rights and respect for all those who were thrown back into Mexico with no recourse or resources, and no options.”

Ending that policy and allowing people who already have asylum cases to continue pursuing those cases inside the U.S., she said, was “a tiny harm reduction but very important.” And overall the process of winding it down has been orderly and safe, with immigration officials admitting limited numbers of the asylum seekers waiting in Mexico to the United States per day, and with stringent COVID-19 safety protocols in place.

The most urgent issue at the border right now, Cerneka said, is the need to end Title 42 expulsions, the immediate removal of migrants under a Centers for Disease Control and Prevention (CDC) health order put in place in 2020. The policy has allowed border officials to bypass typical standards for receiving asylum seekers and instead immediately deport them back to their country of origin. Cerneka said that the United States continues to deport vulnerable asylum seekers daily under this policy “without consideration of risk factors, health, COVID status or credible fear of persecution upon return.”

The policy has continued under the Biden administration, despite public health experts’ statements that there is no valid public health reason to continue such rapid deportations. CDC officials have said that they were bullied by the Trump administration into issuing the order. “We have the capacity at the border to test asylum seekers for COVID-19 and then give them an appropriate opportunity to ask for protection under asylum law,” Cerneka said.

Title 42 expulsions continue to prevent the vast majority of asylum seekers from exercising their legal right to present their asylum claims. “We really need to figure out some way to end Title 42,” Cerneka said.

The Biden administration has issued guidelines that exclude unaccompanied minors from Title 42 expulsions. However, so many unaccompanied migrant children have crossed the border in recent days that systems have been overwhelmed, prompting officials to hold some children in short-term processing centers for longer than 72 hours, the legal maximum before they must be transferred to child-appropriate housing run by Health and Human Services. The U.S. Catholic Bishops’ Justice for Immigrants Campaign has stated it is working closely and urgently with partners at the border to find solutions and to ensure children are placed in appropriate and safe housing.

The Biden administration has claimed that the Title 42 policy remains necessary to control the flow of migration and the spread of COVID-19. Responding to the building talk about a crisis at the border, Homeland Security Secretary Alejandro Mayorkas has said the situation at the border is not a “crisis,” but a “challenge” to be managed that will take time.

But Cerneka, echoing other immigrant advocates, said, “I understand that it is complicated, but this is a moral and legal issue, and it can’t wait.” She said she was “sad that things like Title 42 have not changed with the departure of Trump. Well-intentioned activist people keep telling us to be patient because Biden has not been in office long. But we can’t be patient because so many people have been denied justice, and their lives have been put at risk by our policies for far too long. So my job is not to be patient but to be impatient.”