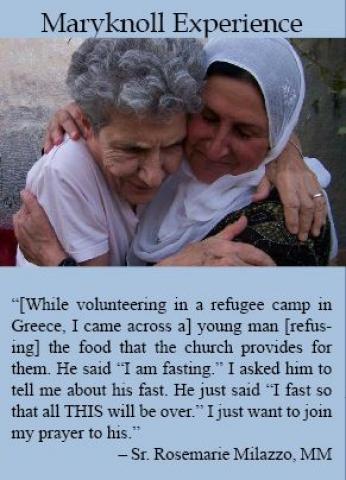 This is an abbreviated version of the brief on refugees as part of our election briefs series, Faithful Voting and Global Concerns. View the entire brief here. The following article was published in the July-August 2020 issue of NewsNotes.

The United States has long been the world leader in offering resettlement to refugees. Under the current Administration, the U.S. refugee program has been diminished, resulting in refugees being stranded in temporary shelters abroad.

A “refugee” is someone who has crossed an international border in order to flee persecution due to race, religion, nationality, political opinion, or membership of a social group. To gain refugee status, individuals must be recognized by the UN refugee agency, UNHCR, or a national government as fitting the criteria. If they qualify, they have the right to permanent resettlement in a safe country.

Only a small percentage of refugees – often the most vulnerable – opt for permanent resettlement abroad; most remain in the neighboring countries to which they initially fled or eventually return home. Before they are resettled by a country which volunteers to receive them, refugees go through an extensive screening process that takes, on average, 18-24 months.

Since 1980, the U.S. has aimed to resettle an average of 95,000 refugees per year – the most of any country. However, the Trump administration’s goal for fiscal year 2020 was to admit a maximum of just 18,000 refugees.
Meanwhile, the world is facing a staggering number of people who have been forcibly displaced and the worst refugee crisis since World War II.

Diplomatic and humanitarian solutions are shrinking as nations fail to cooperate to deal with underlying causes of violence and provide permanent solutions for refugees. When countries such as the U.S. draw back from their commitment to help refugees, refugees are left waiting for help. With decreases in funding, refugee agencies in the U.S. continue to close.

In this time of unprecedented global migration, Pope Francis has made it clear that our faith calls us to respond with compassion to the needs of those fleeing violence in their homelands. Based on the inherent dignity of each person as created in the image of God and our biblical call to “welcome the stranger,” Pope Francis says that nations should act toward refugees and migrants with “generosity, enthusiasm, wisdom, and far-sightedness.” To displaced people he has said, “You are at the center of the Church’s heart.” To wealthy nations, he has said that ungenerosity toward refugees is “an alarm bell warning of the moral decline we will face if we continue to give ground to the throw-away culture.”

Faith in action:
Contact Congress to urge them to revitalize bi-partnisan U.S. support for refugees.
Watch a 30-minute webinar about this  issue brief