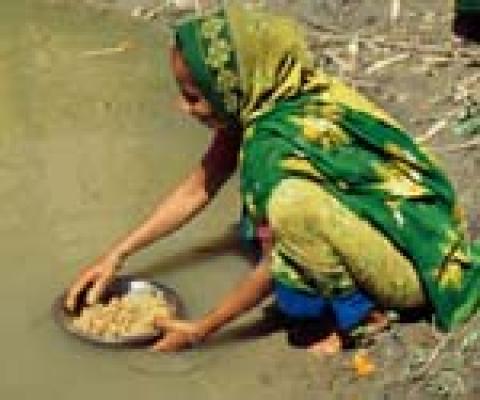 "The lack of clean water is a major problem for millions of people in our world," writes Maryknoll lay missioner Flavio Rocha, who lives and works in São Paulo, Brazil. In Flavio’s reflection on Jesus’ life, below, he asks how Jesus would respond to the ways in which water has been privatized and polluted. The article continues with some of the suggestions for action put forward by the Global Concerns committee of the Leadership Conference of Women Religious (LCWR) and by faith-based organizations working with Congress to promote safe drinking water, sanitation, and hygiene (WASH).

Growing up in a semi-arid region, Jesus knew the importance of water for his people. No wonder he refers to water in countless metaphors in his teachings. A few examples are his conversation with the Samaritan woman at the well when he was thirsty and his first miracle transforming water to wine at the wedding at Cana.

One of the first acts in his mission was to be baptized by John. This act is full of symbolism. Jesus humbled himself to be in solidarity with the people that John was baptizing, the less fortunate in that society. Today, the site of Jesus’ baptism, the Jordon River, is suffering. Every day sewage is dumped into it from nearby cities, and plantations’ irrigation canals deplete its water. Today, it would be difficult for John to baptize anyone in this slowly dying river.

Jesus chose to live in Capernaum, near the Sea of Galilee, a lake where scores of people who Jesus accompanied made their living as subsistence fishermen. Currently this lake – which served as the setting for so much of Christ’s preaching – is being destroyed by plantation agriculture that both drains its water for irrigation and pollutes it with agro-toxins. Because they are sources for the Dead Sea, unchecked water siphoning from this lake and the Jordan River have caused the Dead Sea levels to drop one meter of water each year.

Water is a symbol of commitment in Christianity. It is essential for all life on the planet, but it has been privatized, sold, polluted and seen as any other commodity in our society. How would Jesus respond to this model of development? How can Christians challenge this situation and make water the fountain of life and not the cause of death?

Sr. Kathleen Ries, CSA, president, Board of Directors, UNANIMA International (an NGO comprised of 17 congregations of Roman Catholic sisters) writes about the right to water in "Resolutions to Action" by the LCWR Global Concerns Committee: "Water has a double-edged dynamic: beneficial/destructive; clean/polluted; and wasted/conserved. Water occupies a complex place in the global community." On water commodification, Ries states that the story changes depending on whether one is talking about an industrialized country like the U.S. where people will pay for water services and a less industrialized country where people cannot afford the connection charges required by the private provider.

Ries gives the example of Bolivia where people could not afford the connection charges required by the privately owned provider. "Some 200,000 people in Cochabamba, a quarter of the population, were not connected. After street protests and riots resulting in killings, the government cancelled the agreement with Bechtel and United Utilities."

Ries reflects that "water must be recognized as a human right and a critical environmental issue. To ensure that everyone has access to safe drinking water and sanitation, several measures need to be taken: guarantee the right to water; decentralize the responsibility for water management to local and regional agents; develop communication networks to provide up-to-date information to people at the local level; Increase and improve financing for infrastructure and sanitation maintenance; train local populations in water harvesting; and develop eco-sanitation—turning waste into a resource."

She concludes saying that "the need is clear; the issue is critical. What is lacking is the political will to address these difficult issues and to secure the financing necessary to address them.

U.S. advocates for WASH focus on the Senator Paul Simon Water for the World Act, which seeks to apply lessons learned by improving U.S. programming for safe drinking water, sanitation and hygiene education in order to ensure that taxpayer dollars are used in the most effective and efficient manner and provide the greatest benefit to people in need.

World Water Advocacy Day is March 22; learn more at www.unwater.org. Read Blue Covenant: Global Water Crisis and Fight for the Right to Water by Maude Barlow; available on Amazon and other book sites.