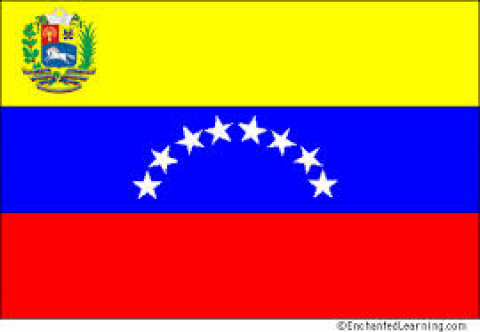 What is happening in Venezuela, rocked since early February by weeks of almost daily protests? The government’s arrest of students in the city of San Cristobal denouncing campus insecurity sparked a chain reaction of protests by students and upper middleclass Venezuelans who oppose the populist government of President Nicolas Maduro. Maduro narrowly won an election in April 2013 to replace his mentor and leader of the socialist revolution in Venezuela, Hugo Chavez. The opposition blames him for one of the highest rates of violent crime in the world, an economy racked by high inflation, and chronic shortages of basic foods. They also accuse the government of repression of peaceful demonstrations and control of the press. The following piece was published in the May-June 2014 NewsNotes.

Images in U.S. mass media of protesters barricading streets, running battles with riot police or National Guard, and huge demonstrations give the impression of a country on the verge of civil war. Indeed, Secretary of State John Kerry has accused President Maduro of waging "a terror campaign against his own people" and threatens, along with some members of Congress, economic sanctions against Venezuela.

While U.S. media has generally portrayed the situation in Venezuela as peaceful protests being broken up violently by Venezuelan government security forces, the reality is more complex. The government has sometimes forcefully repressed protesters, even to the point that three were shot to death apparently by intelligence agents. On the other hand, many of the protests have been violent as well, and six members of the National Guard have lost their lives. A number of government supporters have also been killed while trying to remove barricades or get around a protest.

Though some protests are peaceful, small groups of masked protesters, especially in wealthier sections of eastern Caracas, wage heated street battles with the National Guard and riot police. At least two citizens on motorbikes were killed when they drove into razor wire strung by protesters across the street as part of their effort to shut down commerce.

Who are the protesters? On January 23, two hardline leaders of the opposition, Leopoldo Lopez and Maria Corina Machado, called for street protests to force Maduro’s "exit." While discontent with inflation and street crime is widespread, the protests have been largely limited to upper middle-class opposition areas and to university students; poor and working class people in the populous barrios still largely support the government. Having lost the presidential election of April 2013 and also local elections last December, the opposition is divided over whether to use violent street protest to achieve what they have failed to do democratically: regime change.

In a February 28 statement, the Latin American Council of Churches (CLAI) affirmed the right to protest as essential to democracy but denounced "the antidemocratic violence that seeks to change government in Venezuela by force."

In fact, the protests are less widespread than apparent in the mass media. A School of the Americas Watch (SOAW) delegation of U.S. church people in mid-March was surprised to find most of the country peaceful: "We experienced a country where schools, businesses, transportation and services seem to be functioning at a normal pace. In fact, of 337 municipalities, only 18 have experienced incidents of violent protest. We are, however, aware that in the border states with Colombia and in some wealthy neighborhoods incidents of violence continue to persist."

The Venezuelan government’s response to these protests has varied from heavy-handed to conciliatory. The student protests in February were often met with disproportionate use of force, inciting an escalation of violence. Attorney General Luisa Ortega has recognized that security forces engaged in "excesses" and has arrested 21 members in relation to the three deaths mentioned above and is investigating 60 other alleged human rights violations of protesters.

The Venezuelan human rights group PROVEA is concerned about numerous reports of unidentified civilians firing on protesters and criticizes Maduro for "inciting the population to confront protesters," using provocative terms such as "fascists" to describe them.

Indeed, more open dialogue is needed if Venezuela is going to overcome this difficult moment. On February 26 Pope Francis prayed at the end of a public audience that "the whole Venezuelan people, beginning with political leaders and institutions, will endeavor to promote reconciliation through mutual forgiveness and a sincere dialogue" and has encouraged the papal nuncio to Venezuela to take an active part in promoting dialogue.

Breaking with the effort of the United States and the government of Panama to have the Organization of American States (OAS) condemn the Venezuelan government, the OAS adopted a declaration on March 7 in "appreciation, full support and encouragement for the initiatives and the efforts of the democratically-elected Government of Venezuela" and encouraged it and the opposition to "move forward with the process of national dialogue towards political and social reconciliation."

Lisa Sullivan served as a Maryknoll lay missioner in Venezuela and now is Latin America coordinator for SOAW. In March, she wrote from her home in Venezuela: "The violence must end. All Venezuelans can and must contribute to the return of peace and order. The government should continue to detain and investigate security forces who responded with violence. Radical forces in the opposition must take down roadblocks that create havoc for their own neighbors. And the international media should be called for their efforts to misrepresent the current reality in Venezuela."