Venezuela: Calling all to the table 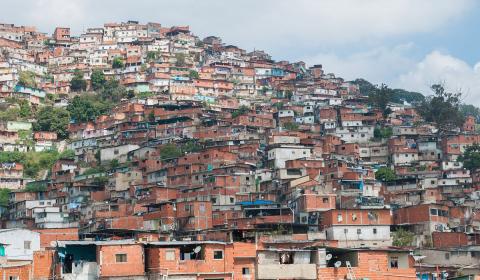 The following reflection about the current political and economic upheaval in Venezuela was written by Lisa Sullivan, a returned Maryknoll Lay Missioner, who continues to live and work in Venezuela. It was published in the July-August 2016 issue of NewsNotes.

Its Bolivarian Revolution gave me hope. How could I not feel hope when most of my neighbors that have been historically marginalized were now going to school or getting medical attention?

But today, this is what I see from my porch: neighbors digging frantically in barren, already-harvested potato fields, hoping to find a few overlooked little spuds. Rastreando, they call it. It is an act of desperation to find food, because for months, the shelves of the stores have been bare.

This crisis is real, brutal, and threatens the health, well-being and future of too many Venezuelans today, especially those most impoverished.

How did the nation with the world’s largest oil reserves come to this?  The answer depends on who you ask.  The opposition blames Nicolás Maduro, the president of Venezuela since 2013.  Maduro blames the US. The press blames socialism. The ruling party blames capitalism. Economists blame price controls. Businesses blame bureaucracy. Everyone blames corruption.

Most would agree, however, that the underlying culprit is a three letter word.  Oil – the source of 95 percent of Venezuela’s exports. Oil – the cash cow that funds easy, cheap imports. Oil – the export giant that deters domestic production of all other products.

Having traveled extensively in this lush and fertile country, it is difficult to believe that Venezuela imports more than 70 percent of its food.  But I shouldn’t be surprised. Quite simply, for decades, it has been much cheaper to import food than to produce it.

At least that was the case when oil prices were high. As recently as two years ago, the price of oil was about $115 per barrel. This February, Venezuelan crude oil plummeted to barely $23 per barrel. That is only $3 more than the approximately $20 cost of extracting it.  So, when the profit per barrel of oil goes from $95 to $3, it’s like your salary going from something like $50,000 a year to $1,600. Could you feed your household?

With oil prices crashing, Venezuela can no longer afford to import food. In fact, the food and medicine that do reach Venezuela these days never actually reach the average person, especially the average poor person. Large portions of imported food and medicine are being siphoned off by corrupt businesses, bureaucrats, military, and black-marketers.

Rebuilding domestic agriculture and production is the long-term solution. But this may take years – perhaps decades. Venezuelans are hungry now.

What is to be done?

Dialogue among the government and the opposition is a good start. But it is not enough. The long-term solution to Venezuela’s problems must come from all sectors of Venezuela. The vast majority want to see less political rhetoric and more economic action. The currency system must undergo radical change.  Impoverished people need guaranteed access to food, but not by subsidizing the product (which ends up in the hands of the corrupt), but subsidizing families.

Unfortunately, the government’s response has been anything but optimal. For instance, President Maduro recently signed a decree creating the Strategic Zone of National Development Mining Arch of Orinoco (OMA). The Orinoco belt, an area rich in gold and other minerals, is also the home to indigenous people, fresh water and sensitive ecosystems. As the Washington Office for Latin America has argued, “this decree violates international human right provisions upheld by the national constitution of 1999, such as ILO’s 169 convention on the rights of indigenous peoples to free, prior and informed consent to any development project in their lands.”

At the same time, the crisis has birthed numerous creative grassroots initiatives and productive solutions that merit attention. The people of Venezuela are busy. They are busy planting food, using alternative medicine, sharing, developing a barter system, and creating hundreds of products from recycled or locally-sourced renewable sources. These kinds of initiatives may not solve the immediate food crisis but, in the long term, they have the potential to open the door to a new kind of society in which we can all survive and thrive.

Photo: Homes in Caracas, Venezula. Photo in the public domain and available via wikimedia commons.