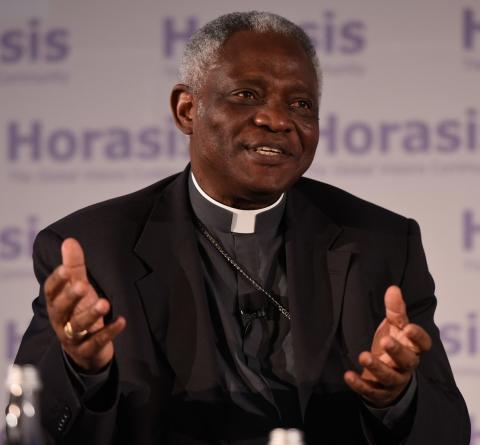 The Vatican has stated that it supports debt cancellation for African countries struggling to respond to the COVID-19 pandemic on top of other urgent crises. This article by AHGINGOS, a group of NGO representatives to the UN Food and Agriculture Organization, was reprinted with permission: https://bit.ly/3u3ii6n. This article was published in the May-June 2021 issue of NewsNotes.

Through a webinar, the Vatican COVID-19 Commission supports the campaign for debt cancellation for African countries.

In a statement released on 8 April, the Dicastery for Promoting Integral Human Development notes that along with the Vatican’s Covid-19 Commission it is “supporting the campaign for debt cancellation for African countries.”

Sister Alessandra Smerilli, Undersecretary of the Dicastery, noted that “this campaign, which is even more urgent because of COVID-19, starts in Africa where the local Church has given shape to a widespread demand in civil society.

Archbishop Gabriel Justice Yaw Anokye of Kumasi in Ghana, also President of Caritas Africa, opened the session by saying: “Now is the time to see, judge and act on behalf of the poor and vulnerable. In times of difficulty and crisis, we can see God’s action in solidarity”. Henry Akaabiam, Secretary General of SECAM, said: “We cannot fail to act, because if Africa lives in debt, the whole world will live in debt. If Africa is doing well, the whole world is doing well”.

A question of justice

Fr. Augusto Zampini, Adjunct Secretary of the Dicastery and member of the board of the Vatican COVID-19 Commission, added that “This is not just a question of technique or mere solidarity, important though that is, but a question of justice. It is a question of intergenerational justice, because we cannot make our children and future generations pay for all the effects of our mistakes, and of spiritual justice.

“Debt and poverty are cousins, they go together unfortunately,” said Sr. Hellen A. Bandiho, STH, Secretary General of ACWECA. “It is certainly an ethical issue, but it is much more than that,” said Fr Charlie Chilufya, director of JCAM’s Justice and Ecology office. The point is that the permanence of the pandemic in the peripheries of the globe, for lack of means, puts everyone’s health at risk”.

Jaime Atienza, from Oxfam, then drew attention to the link between all the forces that can help improve crisis situations. “We are at a time when we need to push finance towards social justice,” he said.

“The urgency of debt cancellation”, said Dominic Chai, SJ, a Jesuit economist for the Vatican COVID-19 Commission, “requires that we work steadfastly and continue this dialogue. In doing so, we will raise both awareness and commitment to a new level, not only in Africa, but also in all regions where the burden of unjust debt is felt.”

Guardians of our brothers and sisters

Finally, Cardinal Peter Turkson, prefect of the Dicastery for Promoting Integral Human Development, noted that “the person, as the Social Doctrine of the Church teaches, has a dignity that cannot be compromised: no one can be left behind because of injustice. We are called to be guardians of our brothers: this is the heart of our solidarity.”§

Faith in action: Sign this petition from the Jubilee USA network calling for greater debt cancellation for impoverished countries: https://bit.ly/3aP4Xaa