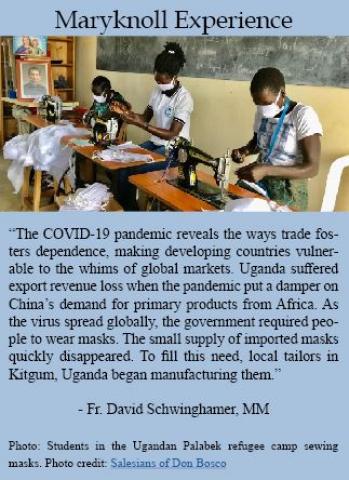 This is a version of the two-page brief on U.S. trade policy published as part of our election briefs series, Faithful Voting and Global Concerns. View the entire series of brief here. The following article was published in the September-October 2020 issue of NewsNotes.

The modern-day international trade system is dominated by corporate interests and the world’s most wealthy and powerful countries. International trade shapes inequality and poverty through its influence on earnings and employment opportunities in both developed and developing countries. Without specific consideration of vulnerable people and the planet, trade policies and agreements are a hinderance to just and sustainable development in the countries and areas where it is needed most.

In 1994, the North American Free Trade Agreement (NAFTA), a three-country accord negotiated by the governments of Canada, Mexico, and the United States, set a template for modern global trade agreements. NAFTA fundamentally reshaped North American economic relations, allowing unprecedented integration between the developed economies of Canada and the United States and Mexico’s developing one. It eliminated most tariffs on products traded between the three countries, with a major focus on increasing free trade in agriculture, textiles, and automobile manufacturing. Regional trade tripled under the agreement, while wages stagnated in Mexico and jobs were lost in the United States.

The World Trade Organization was established one year later. Since then, free trade agreements have become known for favoring corporations while writing the global rules that affect people’s daily lives and the way industries treat the environment. For example, most free trade deals now include a mechanism for corporations to sue governments in private tribunals when they believe that government policy is threating their investment or future earnings potential. This has allowed corporations the power to interfere with government efforts to establish regulations meant to protect the environment, public health, and labor rights.

Researchers have documented the negative impacts of NAFTA: lower wages and more pollution, outsourcing of U.S. jobs, increasing loss of livelihoods for farmers, greater inequality, and increasing migration to the United States. For these reasons, politicians in both parties have been known to oppose free trade agreements over the years. In December 2019, the Trump administration completed an updated version of NAFTA known as the U.S.-Mexico-Canada Agreement (USMCA). It was only after bipartisan negotiations that the USMCA won broad support on Capitol Hill. It entered into force on July 1, 2020.

Although dubbed a “21st century trade template,” the USMCA deal still falls far short of the transformational trade policy needed for a just and sustainable world. Although it is the first trade deal after the passage of the landmark Paris climate agreement, there is no mention of climate change commitments and the deal establishes special protections for the oil and gas industry.  And even with Mexico’s new, required labor reforms under the deal, abuses continue along the U.S.-Mexico border, including the unlawful arrest of labor lawyer and activist Susana Prieto and illegal firings of workers’ organizing unions.

The United States has also used trade policy as a weapon to sanction other countries. Under the Trump administration, the United States has used the threat or use of tariffs on steel, solar panels, and agriculture as a negotiating tactic with China, the E.U., Mexico, and Canada. These tariffs ultimately hurt U.S. farmers and manufacturers and international relationships.

The Church teaches that the economy exists for the person, not the person for the economy. Nearly ten years before NAFTA, the U.S. bishops released the pastoral letter Economic Justice for All (1986) in which they stated, “Our faith calls us to measure this economy not only by what it produces, but also by how it touches human life and whether it protects or undermines the dignity of the human person.”

Maryknoll leadership has also expressed its perspective on trade policy in light of missioners’ experiences, starting with a statement, “Trading in Justice,” released in 2002: “Time after time we have witnessed the disastrous impact on these communities of decisions made in distant or disconnected places. We see this happening once again as people in increasingly centralized positions of power negotiate trade agreements that place profit and growth before human and environmental well-being.”

In his 2009 encyclical, Caritas in Veritate, Pope Benedict XVI explained the need for a people-centered economy and for trade policy to allow sufficient national sovereignty to prioritize the needs of local people. In addition, the U.S. bishops have expressed their priorities for trade policy in light of Catholic social teaching, including in a recent two-page document released following the USMCA trade agreement.

Encourage your candidates to go beyond the reforms in the USMCA to develop a transformational trade policy that achieves the following:

The proliferation of trade agreements and a globalized economy have shifted production of the building blocks for life-saving medicines primarily to China and India. Large pharmaceutical companies have also bought up smaller ones and shuttered those factories to prevent competition. When China put stay-at-home orders in place, this affected the supply of several life-saving medicines around the world, as they could not be produced locally.

God of the desolate, our economy grows rich on cheap labor, we clothe ourselves in cheerful garments made by the sweat of the poor, delight in music played on machines made by those on subsistence labor. Our lives are full of luxuries carved out of the tears of the poor. Help us to work for a world in which the poor have equal dignity with the rich, and enjoy a fair share of the fruits of their labor. Help us to weep today with those who weep, that we might laugh with them when they rejoice in your kingdom.

Explore your candidates’ websites to see if they express their priorities for trade policy. How do their platforms measure up to the priorities for just and transformational trade policy listed above? If a candidate’s position is unclear, reach out to the campaign and ask. Share with them your vision for fair and just trade policy.