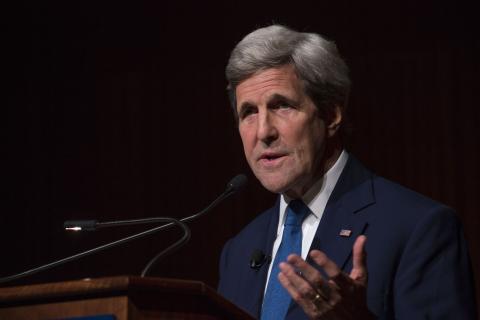 The new U.S. climate commitments represent the United States’ return to global efforts to combat climate change. This article was published in the May-June 2021 issue of NewsNotes.

On Earth Day, April 22, President Joe Biden hosted 40 world leaders for a virtual Leaders Summit on Climate at the White House. Pope Francis spoke briefly as part of the summit, imploring the leaders to take courageous action to “take care of nature, because it takes care of us.”

At the event, the Biden administration released a new U.S. “Nationally Determined Contribution (NDC),” or emissions mitigation pledge, to re-establish the U.S. commitment to the Paris climate agreement. The Biden Administration also released the first ever International Climate Finance Plan.

In these plans, the United States pledged to reduce greenhouse gas emissions by 50-52% below 2005 emissions levels by 2030 – double the U.S. original NDC. This is the boldest climate pledge in U.S. history.

It puts the United States on target to help achieve the Paris agreement’s lower ambition goal of limiting average global temperature rise to 2 °C (3.6 °F) by 2100, though it falls short of the targets for the 1.5 °C (2.7 °F) goal that is necessary to avoid the worst impacts of climate change. According to Climate Tracker, the United States would need to reduce emissions by 57% to be on the 1.5°C trajectory.

To reach the goals, the Biden administration plans to decarbonize the U.S. electricity and transportation sectors by 2035. The recently released Biden infrastructure plan is part of the roadmap to achieve the NDC. The infrastructure plan’s goals include building climate-resilient infrastructure and creating clean energy jobs in communities of color and low-income communities who are especially vulnerable to climate change impacts or whose jobs are impacted by the energy transition.

Faith-based advocates who attended this year’s annual Ecumenical Advocacy Days conference had the opportunity to meet virtually with their Members of Congress, to ask them to approve an infrastructure bill that is climate resilient, equitable and just and to appropriate the remaining $2 billion of the 2014 U.S. pledge to the Green Climate Fund, which prioritizes providing funding for climate change mitigation and adaptation for the world’s poorest countries.

The climate finance plan pledges to end financing for carbon-intensive projects abroad. This is an important step for the clean energy transition, but the plan has some shortcomings. The plan does not include a phaseout of natural gas which produces methane, a greenhouse gas even more potent and dangerous than carbon. The plan is short on details, directing agencies to develop their own agency-specific guidance.

President Biden will have the opportunity to deliver more climate commitments at several upcoming meetings with world leaders. These include the Spring G7 high-level diplomatic gathering and the NATO  and U.S.-E.U. summits. Scotland will host the COP26 climate talks in November, during which all eyes will be on the United States as it comes back to the negotiating table.

The Biden administration is in a tricky position to make progress on climate, with a narrow majority in Congress and pressure from both progressives and conservatives. Without 60 votes in the Senate, there will be limited opportunities to include climate commitments in legislation with a simple majority unless advocates can sway 9 or 10 Republicans to vote for a climate bill.

Since the commitments are not binding, the Administration is aware that the rest of the world is concerned that a political change at the top could mean that the U.S. climate commitments could again go unfulfilled.

However, the auto and utilities industries are already moving towards a clean energy future, indicating the growing recognition of the business sector that addressing climate change is necessary. But more prophetic action is needed, and advocates will continue to call for the United States to take its fair share of action to protect our future. §

Faith in action: Urge President Biden and your Members of Congress to take bold action against climate change: https://bit.ly/3nBnlsi