In a new series of two-page briefs, Faithful Voting and Global Concerns, the Maryknoll Office for Global Concerns addresses key global issues for voters to consider for the 2020 elections. Inspired by the gospel and Maryknoll missioners’ commitment to stand with vulnerable communities around the world, we urge U.S. citizens to consider these issues and vote to advance the cause of peace, social justice, and the integrity of creation. This is a preview of the first issue, first published in the May-June 2020 issue of NewsNotes. The entire series of two-pagers will be available here: https://bit.ly/ElectionBriefsMOGC

Read this issue as a pdf 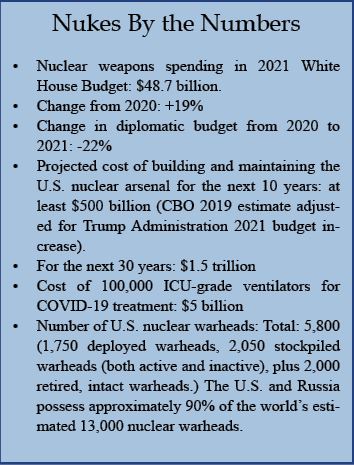 Nuclear weapons and climate change are widely recognized by scientists and security experts as “twin existential threats” to life on earth. While much more action is needed, the gravity of climate change has largely entered the global consciousness, thanks to global youth activism. But since the end of the Cold War, the nuclear threat has failed to grab the public imagination in the same way. Experts warn that the danger of nuclear annihilation is greater than ever, citing the dismantling of the global arms control regime, as world leaders walk away from agreements and multilateral structures which reduce the nuclear threat with no plans for how to replace them. Vast resources are spent on new nuclear weapons, including the development and deployment of “low-yield” nuclear weapons which can be used to wage “winnable” wars and new Pentagon plans for a nuclear first strike.

Pope Francis and the U.S. Conference of Catholic Bishops have repeatedly condemned the possession of nuclear weapons – even for purposes of deterrence – as sinful and unacceptable. Nuclear weapons are a threat to life and to our common home, and money spent on our nuclear arsenal should instead be spent to promote economic and climate justice, and build a security regime rooted in trust and enforced by effective, nonviolent measures. Nuclear disarmament is an essential element of the Church’s call to protect all life and defend human dignity.

1. Catholic voters are left facing a gap between official position of the U.S. government and most political leaders on the one hand, and the clear teachings of the Church on the other. But there are concrete policy commitments we can seek from candidates:
2. Renew the crucial New Strategic Arms Reduction Treaty (New START) – the centerpiece of nuclear arms control and verification between the U.S. and Russia – set to expire in February, 2021.
3. Re-enter the Iran nuclear agreement (Joint Comprehensive Plan of Action), from which the U.S. withdrew in 2018.  Then, negotiate to strengthen it.

4. Pursue the five policy solutions of the Back From The Brink campaign to prevent nuclear war:

“In a single plea to God and to all men and women of good will, on behalf of all the victims of atomic bombings and experiments, and of all conflicts, let us together cry out from our hearts: Never again war, never again the clash of arms, never again so much suffering! Come, Lord, for it is late, and where destruction has abounded, may hope also abound today that we can write and achieve a different future.”
- Pope Francis, Hiroshima, 24 November 2019

The coronavirus epidemic is a stark reminder that we live in a globally interdependent world. True security demands international structures for building trust and cooperation.

“We are witnessing an erosion of multilateralism which is all the more serious in light of the growth of new forms of military technology. Such an approach seems highly incongruous in today’s context of interconnectedness; it represents a situation that urgently calls for the attention and commitment of all leaders.” – Pope Francis, “Address of the Holy Father on Nuclear Weapons,” Nagasaki, 24 November 2019 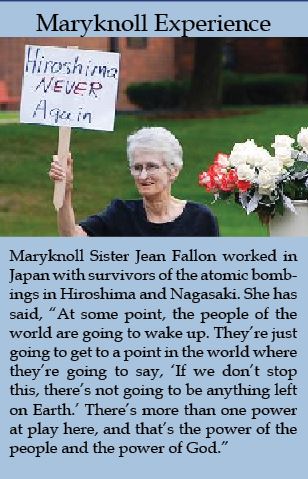 Find out where the candidates stand on nuclear disarmament and the policy proposals listed here. If a candidate’s position is unclear, reach out to the campaign and ask. Let candidates know you are concerned about the existential threat posed by nuclear weapons, get them on the record, and vote for peace!