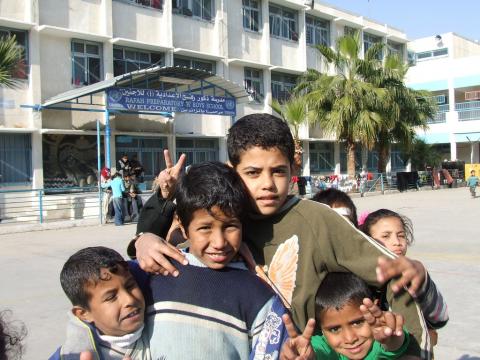 On January 16 the Trump Administration sent a letter to United Nations Relief and Works Agency for Palestine Refugees in the Near East (UNRWA) announcing its decision to withhold $65 million from its scheduled $125 million contribution to the agency’s humanitarian programs. The following article was published in the March-April 2018 issue of NewsNotes.

Since the UN General Assembly passed a resolution in late December condemning the United States’ recognition of Jerusalem as the capital of Israel, the Trump administration has said it was considering retribution against those nations which voted in favor of the resolution as well as against Palestinian leaders who said the United States should no longer play a role in peace talks with Israel. The decision to severely reduce U.S. funding to the UN Relief and Works Agency (UNRWA), which funds schools and clinics for Palestinians, appears to fit the bill.

The UNRWA is a relief and human development agency funded almost entirely by voluntary contributions from UN Member States. The agency supports Palestinian refugees in the Occupied Palestinian territories of the West Bank and Gaza, Lebanon, Syria, and Jordan.

The State Department spokesperson said that along with the decrease in U.S. funding to the UNRWA, there is a need for a fundamental review of UNRWA. “As across the U.N., the United States should not be asked to bear a disproportionate share of these costs,” the spokesperson said. “It is time other countries, some of them quite wealthy, step in and do their part to advance regional security and stability… It is time for a change.”

The UNRWA carries out humanitarian projects for refugees, including educational support for over 5 million children, emergency food support to over 1 million refugees, and greatly needed health care services. In Gaza, where more than half of the 1.9 million population are refugees, 80 percent of people are dependent on international aid, including aid from UNRWA. The New York Times reported on February 11 that UN officials warn that current conditions are so dire that “Gaza is nearing total collapse, with medical supplies dwindling, clinics closing and 12-hour power failures threatening hospitals. The water is almost entirely undrinkable and raw sewage is befouling beaches and fishing grounds.”

The Trump Administration has faced strong criticism from U.S.-based faith groups over its decision to cut UNRWA’s funding. The Friends Committee on National Legislation called the decision “a perverse affront to the oft-stated guideline of U.S. humanitarian policy that ‘a hungry child knows no politics,’ these cuts to UNRWA use the hunger of Palestinian refugee children as a political tool.” Churches for Middle East Peace stated it “strongly believes that removal of this funding undermines U.S. and Israeli security interests and will do significant harm to the Palestinian population; particularly to children, many of whom already live below the poverty line.”

The Faith Forum on Middle East Policy, of which the Maryknoll Office for Global Concerns is a member, sent a letter to President Trump on February 6 expressing concern that this decision could devastate an already vulnerable population: “Humanitarian aid must be provided to civilians on the basis of need alone, not used as a way to attempt to extract concessions from political leaders.” Further, the letter goes on to say that this move “appears to be part of a series of actions to deny basic rights to Palestinians – in this case, their fundamental rights under international law.”

More than one hundred members of Congress expressed their opposition on February 8 in a letter to President Trump which asked him to reconsider the decision to cut funding for the UNRWA, emphasizing the danger of weakening the Palestinian leadership and delivering a blow to security for the region. According to the letter, even Israel appealed to the U.S. to continue its support for UNRWA: “the Israeli government deems UNRWA’s work providing basic services and education to Palestinian refugees so consequential for Israeli security that it has reportedly weighed in with your administration in support of maintaining US contributions to the agency.”

Eleven countries – Switzerland, Finland, Denmark, Sweden, Norway, Germany, Russia, Belgium, Kuwait, the Netherlands and Ireland – advanced their payments to UNRWA for 2018 early, but this will not make up for the gap in U.S. funding and leaves many concerned about the future of the U.S.’s commitment to support Palestinian refugees.

While world leaders debate political solutions and Palestinians face dire economic conditions and human rights violations, hope can be found among the people. One example is that of Majd Mashharawi, a civil engineer in Gaza who along with her partner, Rawan Abdullatif, have created a type of brick made out of recycled ashes of destroyed buildings—a new building material that is environmentally-friendly, cheap, locally sourced, heat-resistance and sound-proof. Called “Green cake,” the brick is an ingenious work-around in a community where building supplies are severely limited by Israel.