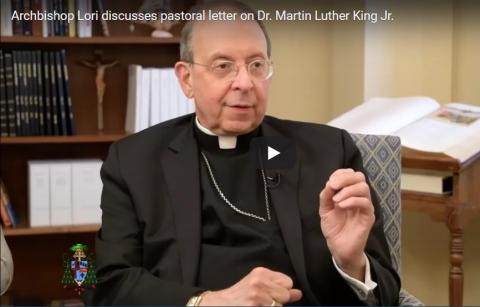 Archbishop of Baltimore William E. Lori published a pastoral letter entitled “The Enduring Power of Dr. Martin Luther King Jr.’s Principles of Nonviolence,” on February 14. The following article was published in the March-April 2018 issue of NewsNotes.

The six principles of active nonviolence advocated by Dr. Martin Luther King are "more necessary than ever," according to the Archbishop of Baltimore William E Lori. In anticipation of the 50th anniversary of the assassination of Dr. King on April 4, Archbishop Lori shared a pastoral letter entitled “The Enduring Power of Dr. Martin Luther King Jr.’s Principles of Nonviolence” with the Catholic community of Baltimore.

The 30-page pastoral letter on nonviolence was released on February 14, the same day that 17 people, mostly children, were killed in a mass shooting by a former student at Marjory Stoneman Douglas High School in Parkland, Florida. The letter also comes nearly three years after the death of Freddie Gray, Jr., the Baltimore man who died in hospital from spinal injuries a week after police took him into custody. Gray’s death sparked major protests that rocked Baltimore for weeks.

Reflecting on the current U.S. political climate, the gun violence, and the numerous other challenges impoverished communities in Baltimore face, Archbishop Lori calls for changing the ‘negative narrative’ about the city by embracing King’s vision of active nonviolence. The archbishop recognizes that the struggle for civil rights to which Martin Luther King gave his life is far from won; now, fifty years later we are seeing a rise of white supremacy, demonizing of immigrants, hate crimes against minorities and increasing violence in our society:

“Weighing heavily on our minds and hearts is the sin of racism that continues, sometimes overtly but often subtly, to insinuate itself in our relationships, institutions and communities of faith, including our own. Indeed, the sin of racism has tarnished the soul of our society for so long that racist attitudes can be deeply embedded in our subconscious, such that we may hardly know they are there. We must bring to light such attitudes and overcome them.”

UPDATE: Read an interview with Archbishop Lori about his pastoral letter published on the website for the Archdiocese of Baltimore on March 1, 2018.

Lori further notes that violence in U.S. society is not only the terror of school shootings or inner-city gun violence but also a “vitriolic and coarse public rhetoric” that “spills over into private conversation.”

“They may not kill their neighbors with bullets but they do 'kill' them with words and gestures of disrespect. The commandment ‘Thou shalt not kill’ pertains to all forms of violence against others, including the violence of economic inequality.”

In the face of this harsh reality that leads many of us to become cynical or indifferent, the pastoral letter invokes the persistent hope of Dr. King to create the Beloved Community, a society based on justice, equal opportunity, and love of one's fellow human beings. “All of us need to walk the path of nonviolent hope,” Lori says.

The best way to observe the anniversary of Dr. King's assassination, Archbishop Lori claims, is to pay careful attention to his prophetic vision of nonviolence. Lori calls for three steps: Retrieving the legacy of Martin Luther King; Changing the narrative of hopelessness or indifference by reflecting on Dr. King’s six principles of active nonviolence; and Engaging in the practice and spirituality of nonviolence that leads to lasting social change through one’s lived experience.

The letter reviews King’s six principles of nonviolence (listed below) and offers questions for reflection for parishes, communities, families and individuals:

Finally, Archbishop Lori recognizes that for the Catholic community of Baltimore to successfully confront the challenges of racism, violence, and despair will require deep personal commitment on the part all Catholics in the Archdiocese; a fuller collaboration among parishes, diocesan offices and community organizations; and greater interfaith action and cooperation to confront systemic injustices and build peace.

As members of the Catholic Nonviolence Initiative, a project of Pax Christi International working to integrate the teaching of Gospel nonviolence into all levels of the Church, we are grateful for this significant pastoral letter on nonviolence by a major leader of the U.S. Catholic Church.