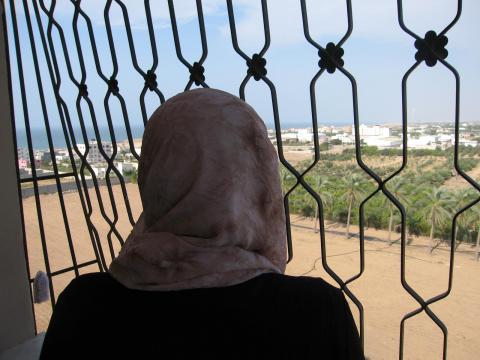 The Maryknoll Office for Global Concerns, as a member of Churches for Middle East Peace, joined 100 national organizations in sending the following letter, excerpted here, to President Biden on June 8, 2021, asking him to halt new weapons sales to Israel: https://bit.ly/3wT81uX. This article was published in the July-August 2021 issue of NewsNotes.

We, the undersigned non-governmental organizations focused variously on human rights, peacebuilding, and the protection of civilians, write in opposition to the United States government’s plans to sell $735 million in advanced weapons systems and munitions to Israel. The planned arms sales to Israel would send a signal of support for Israel’s recent conduct in occupied Gaza and East Jerusalem, which includes likely violations of international humanitarian law.

Over the past several weeks, Americans have watched in horror as the Israeli government used U.S.-manufactured weapons in a devastating assault on civilians in Gaza, killing over 220 Palestinians, including at least 67 children, while Hamas and other Palestinian groups in Gaza launched thousands of rockets against Israeli population centers. While most of the rockets from Gaza either missed their targets or were intercepted by Israel’s missile-defense system, Iron Dome, Israeli airstrikes destroyed schools, refugee camps, international media outlets, hospitals, and Gaza’s only COVID-19 testing lab. Over 52,000 Palestinians have been displaced, which has exacerbated an already desperate humanitarian situation for Palestinians on the Gaza Strip, during a pandemic.

We welcome the recent ceasefire and appreciate your administration’s support for it, but we are concerned that the situation remains extremely fragile. Even since the ceasefire has been in effect, there has been escalating violence in Al-Aqsa mosque. Moreover, the forced expulsions of Palestinian families in Sheikh Jarrah, which precipitated the latest outbreak of conflict, has also not been settled, but merely delayed by Israeli courts.

Blocking this weapons sale will not change the reality of daily life for Palestinians living under Israeli occupation. Those living in Gaza will continue to suffer from severe shortages of life-saving medicines, food, electricity, and clean water, because of Israel’s illegal military blockade, which makes life unsafe and unbearable. But halting delivery of the weapons would send a clear message that your administration is unwilling to fuel further attacks on civilians in Gaza.

Given the likely continuing violations of international humanitarian and human rights law by the Israeli government, delivery of these weapons would greatly undermine your administration’s goal of pursuing a foreign policy centered on human rights. Moving forward with this sale would also hurt the U.S. ability to play a constructive role in the peace process, which could have lasting implications for the likelihood of resolving the conflict...

Ilan Baruch and Alon Liel, who both served as Israel’s ambassador to South Africa, write in Ground Up on June 8, on the occasion of the fifty-fifth year since the occupation of the West Bank began, that “It is time for the world to recognize that what we saw in South Africa decades ago is happening in the occupied Palestinian territories too. And just as the world joined the struggle against apartheid in South Africa, it is time for the world to take decisive diplomatic action.”

“'We have failed': Journalists unite and demand truthful coverage of Israeli occupation” https://bit.ly/3wTlbYF

The Middle East Eye reports on June 9 that 250 journalists working for some of the world's top media outlets, including The Washington Post, Wall Street Journal and Los Angeles Times, signed an open letter calling on the news industry to stop "obscuring Israeli occupation and the systemic oppression of Palestinians" in the media.

Saree Makdisi writes in The Nation on May 17 that, “with the explosion of Israeli violence this last week, Palestinians are experiencing a level of terror that is both new and painfully reminiscent of the terror of 1948.”

Haggai Matar writes in 972 Magazine on June 1 that “Netanyahu may be heading out, but his former allies and right-wing policies are still very much in.”