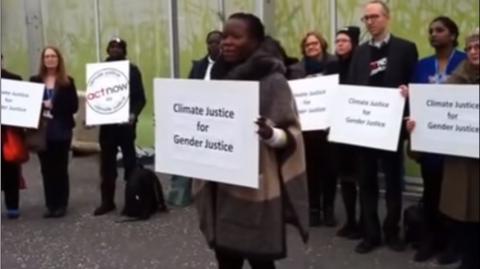 About half of the world's farmers are women. Yet gender equality is not included in the operative section in the new climate agreement.

Many poor communities depend on women to grow most of the food they eat, but women face many barriers to success. They are excluded from access to credit, extension services, and productive assets. Women farmers play an irreplaceable role in ensuring food security. If there is to be climate justice, there must be gender justice.

December 8, 2015 was Gender Day at the Paris Climate Summit. Actions for gender justice happened both inside and outside of the negotiations. Watch this 30 second video is of one those actions. A woman from Uganda says:

"[Climate change] means that families will fall sick, will starve, will not have animals or food on their tables. The impact of climate change is real in Africa and Uganda. We therefore approve of an agreement that takes care of needs of communities. Climate Justice for Gender Justice!”