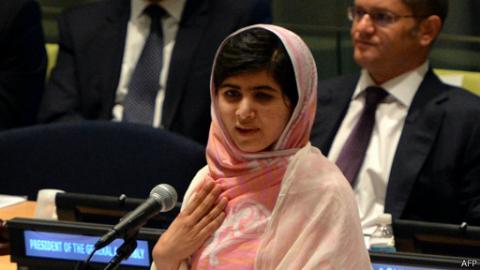 Taking advantage of the summer vacation, 17 young women recently travelled from Hong Kong to Maryknoll NY as part of a program whose goal is to familiarize Maryknoll Convent School students with the life and work of the missioners who were instrumental in starting their prestigious school. As part of their trip, the women visited places where the Maryknoll missionary dream began. They attended a presentation about the work of the Maryknoll Office for Global Concerns that included an explanation about the work of the United Nations and the role of civil society. The students also got a glimpse of past events at the UN.

Thanks to the UN system that makes available videos on demand, the students were able to see the event on Malala Day, July 12, designated such in honor of Malala Yousafzai, a young Pakistani woman who was attacked in October 2012 for her efforts to gain an education. On July 12, 2013, her 16th birthday, Malala spoke at the UN; her speech captured the reason for civil society presence at the UN, brought the voice of the voiceless to the dialogue that has shaped international relationships, and has influenced policies that otherwise would have overlooked the life experiences of the people they are meant to protect.

"Today is the day of every woman, every boy and every girl who have raised their voice for their rights. There are hundreds of human rights activists who are not only speaking for human rights but who are struggling to achieve their goals of education, peace and equality. Thousands of people have been killed by terrorists and millions have been injured. I am just one of them. So here I stand… one girl among many. I speak – not for myself, but for all girls and boys. I raise up my voice – not so that I can shout, but so that those without a voice can be heard."

The United Nations has included youth in its development agenda because nations have come to realize the potential of young people to move the development agenda forward. The principle of inclusion cannot be stressed enough as it is pivotal for the success of the development agenda. The post-2015 development agenda will need to include everyone and in a special way, young people who are innovators not only for the future but have proved to be so in the present. Including youth in the dialogue empowers them through recognizing their basic rights which Malala defines as "their right to live in peace, their right to be treated with dignity, their right to equal opportunity, the right to be educated." When these rights are not granted, young people’s dreams are thwarted and their voices muted. "We realize the importance of light when we see darkness," she said in her July 12 speech. "We realize the importance of our voice when we are silenced."

As with other issues that require the cooperation of governments, the development agenda, and in a special way, the education agenda cannot move forward without the partnership of policy makers. Speaking for the young people, Malala called on world leaders to change their strategic policies in favor of peace and prosperity.

All the issues that Malala mentioned in her speech are ones that the UN is grappling with and working to address by including open dialogue with civil society. The UN has created a platform that allows the voices of civil society to be heard which includes the rights of young people, people with disabilities as well as the rights of women, just to mention a few.

Malala’s words touched the hearts of the Hong Kong students; they sent her a note stating, "Thank you for giving us an inspirational talk … which has given us the courage to voice our concerns as teens. You taught us that as long as there is a voice it needs to be heard."

As believers we must listen carefully to the words of Christ through the voice of youth and children and not use violence to silence them. All young people are longing for peace, for equality of opportunity and an end to violence, war, illiteracy as well as poverty eradication so that they can enjoy peace and prosperity.