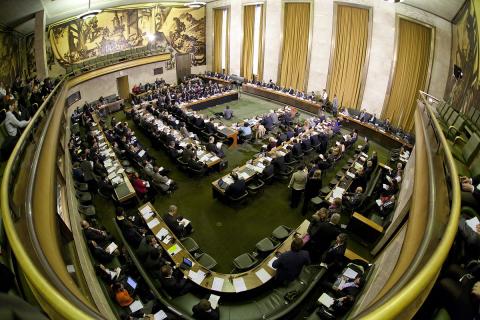 Despite strong opposition from the nuclear weapon states to last year’s nuclear ban treaty, UN Secretary General Antonio Guterres and leaders of faith groups are pressing the countries to resume discussions on limiting and eventually eliminating nuclear weapons. The following article was published in the May-June 2018 issue of NewsNotes.

At the Conference on Disarmament in Geneva on February 26, UN Secretary General Antonio Guterres announced a new initiative to jump-start negotiations on the world’s over-supply of nuclear weapons. He said that there are currently over 15,000 nuclear weapons and the $1.5 trillion per year arms trade is flourishing. “Countries persist in the mistaken idea that nuclear weapons make the world safer,” he stated.

“In response to these concerns, I am preparing, in support of member states, a new initiative aimed at giving greater impetus and direction to the global disarmament agenda,” Guterres said. “This initiative is aimed at restoring the role of disarmament as an integral component of our work to maintain international peace and security. History shows that it has been possible to reach agreement on disarmament and arms control even at the most difficult moments.”

The secretary general is expected to give a longer, more detailed explanation of this initiative in May.

The United Nations’ action comes amid growing frustration at the slow pace at which member states have ratified the nuclear ban treaty passed last year. Of the 122 nations that voted in favor of the treaty, only 57 have signed it and only about ten have ratified it; one of the first states to ratify the treaty was the Holy See. The treaty will enter into force 90 days after at least 50 countries both sign and ratify it.

The challenge now is to bring the nine nuclear-armed nations into the dialogue. Those nations—China, France, India, Israel, North Korea, Pakistan, Russia, the United Kingdom and the United States—boycotted the negotiations leading up to the treaty and indicated they do not plan to sign it.

Both the United States and Russia have announced plans to increase spending on modernization of its nuclear arsenal, compounding the slow rate of ratification. [Read our analysis of the U.S. Nuclear Posture Review in the March-April 2018 issue of NewsNotes.]

The United States appears to be embracing the outdated and failed strategy of nuclear deterrence which, the review states, requires $1.2 trillion over the next 30 years to modernize and maintain the U.S. nuclear arsenal, and lowers the threshold for employing nuclear weapons. In some ways the U.S. is continuing the status quo, advancing thinking and initiatives of previous Administrations. There is an appreciable shift, however, to a more aggressive posture and more expansive potential use of the weapons of mass destruction.

President Vladimir Putin shared Russia’s version of a nuclear posture review during a ‘state of the nation’ speech to the State Duma in March. In his speech, Putin outlined ambitious goals in domestic spending and development, complemented by an assertion that Russia would also modernize its strategic and nuclear arsenal, and develop a “hyper-sonic missile” that travels faster than five times the speed of sound and cannot be shot down by any anti-ballistic missiles currently deployed. It’s questionable if Russia can really afford ambitious increases in both domestic and military spending.

Even if neither country can achieve all its nuclear goals, the fact that the U.S. and Russia have embarked on plans to increase and modernize their nuclear capability does not bode well for disarmament. Given this impasse, 20 faith groups, including the Maryknoll Office for Global Concerns, and individuals of Christian, Quaker, Muslim, Hindu and Buddhist affiliations issued a statement of support for the UN initiative.

“We believe that the time is long overdue for the elimination of nuclear weapons,” the faith communities say, “and we believe that recent developments make it essential that the issue receives prompt and urgent attention.” The statement was presented at the Preparatory Committee for the 2020 Review Conference of the Parties to the Treaty on the Non-Proliferation of Nuclear Weapons (NPT) on April 25 in Geneva.

Just days after the UN postponed the first ever High Level Conference on Nuclear Disarmament that was scheduled to be held in May, the leaders of North and South Korea reaffirmed their joint goal of making the Korean Peninsula nuclear-free through complete denuclearization. The bold goals of a peace accord and an end to nuclear weapons on the Korea Peninsula may renew momentum for the nuclear ban treaty at the UN.

“The horrific destructiveness of nuclear weapons,” the interfaith statement declared, “makes their abolition the only path to authentic human security.”

Faith in action:
Read the full statement by the interfaith group
Read our statement about new hopes for peace on the Korean Peninsula

Photo: Conference on Disarmament at the United Nations, Palais des Nations in Geneva, 2012, by United States Mission Geneva and available via wikimedia commons/CC BY 2.0.